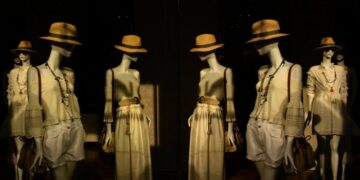 From feminine, to macho, to unisex… what’s invading the world of fashion?

From feminine, to macho, to unisex… what’s invading the world of fashion? Bengaluru, December 12: There was a time when Man and Woman dressed exactly the same (the clothing brand was called Fig Leaf) and it was all the rage in the Garden of Eden. But then a snake came along and introduced this couple to lust, greed and vanity — leading to a craving to get more and more clothes, with separate changing rooms behind two big rocks labelled He and She. And suddenly the two genders emerged, dressed quite differently from each other.

Leather garments were initially very popular (quite a few tigers and cheetahs were slain for their patterns). Then some creative cavepeople got an idea seeing leftover claws and teeth after a big feast. And strung them into chains that women wore around their necks and wrists. Men took leftover tails and tied them around their waist. And that’s how fashion for women and men was born.

Soon women got bored sitting in their caves, and started stepping out — but realised they needed to carry around a lot of lady stuff. A guy whose ancestor was called Gucci saw a dead crocodile and thought of making something called a handbag. Many were so grateful as it coincided with the invention of a carry-around stick that made lips red in an instant.

Then came the invention of shoes. Men were content to wear stodgy old boots for years; but women craved several pairs, especially after a bright young caveman called Prada came up with a concept called high heels that pleased women no end. Several centuries went by; women’s dresses got sexier — sometimes the hems went up, sometimes the necks plunged down. Men’s clothing didn’t change much, though around 40 BC, Greek men briefly tried wearing bedsheets as garments to attend the Senate but that trend didn’t spread. By far, men simply stayed with any garment that had a minimum of two legs to get into.

Many more centuries later, a phenomenon called denim was invented. A film star in Hollywood called James Dean (the anagram of his name was Made Jeans) made it a highly fashionable kind of pant to wear. Women went nuts over jeans too, and suddenly female blue jeans were a rage, especially when teamed with a white shirt.

Back in Bollywood, a film star called Salman Khan made it fashionable to take off his white shirt in public. What a hunk of meat, exclaimed several fans. Then Lady Gaga astounded the world of fashion by wearing a garment made of actual meat sewn together though thankfully animal rights groups put an end to that. Of course, being ‘in fashion’ didn’t just mean garments and shoes — it spread to hair, watches, underwear, luggage, condoms, cars, food, perfume… Yes, perfume.

Once considered an entirely female thing, men wanted to smell fabulous too, and not like yesterday’s socks, so a host of male fragrances were invented. Although the advertising industry gave them macho names like Savage and Beast to allow guys to retain an aura of masculinity…..

A famous designer Ralph Lauren declared “Fashion is something that comes from within.” So does the previous day’s undigested food. That explained some of the horrendous stuff that came out in international fashion weeks. Ramp modelling became a great source of employment for women over 7 ft tall and weighing around 46 kg. Having a stern expression was mandatory. Some men got jealous by this female bastion and stormed the ramp too, strutting their stuff, though they couldn’t make much headway at Victoria’s Secret shows.

Suddenly a single word blew away gender differences in fashion in one fell swoop. That word is ‘unisex’. Male, female, or anyone in the broad area in between, began wearing each other’s clothes, hair, makeup, jewellery, shoes… (okay, maybe not wearing each other’s underwear, though I do know of some secret cases). Crossdressing, cosplay, trans fashion, shemale wear, ambisexual, unigarments, invaded the world of fashion. And that’s why it’s perfectly in style now to have men wear sarees and bangles to cocktail parties, and women shave their heads and wear ties for boardroom meetings.

At the end of the day, or even in the middle of the afternoon, there’s really nothing like style and shopping isn’t it folks — no matter what the gender, no matter whether you’re making a fashion statement or merely stretching your credit card statement. This activity even has a fashionable word to justify it all — called Retail Therapy. I only wish this form of life-saving therapy got covered by my health insurance policy.