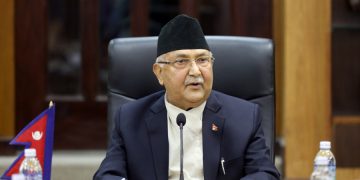 Nepalese politics is a logjam. The ruling Nepal Communist Party (NCP), which had two thirds majority in the House of Representatives (HoR), is split into two. In December 2020, Prime Minister K.P.Sharma Oli had dissolved the HoR and ordered fresh elections to be held in April-May 2021. Meanwhile, the Supreme Court has been going into the question of the constitutionality of the dissolution and the reshuffle the caretaker cabinet. The court has summoned the petitioners and the defendant for a discussion on January 12.

Following the dissolution of HoR on December 20, seven ministers, all from the rival Pushpa Kamal Dahal Prachanda faction of the NCP resigned. On December 25, Oli inducted eight new ministers into his cabinet, appointed a State minister and reshuffled the portfolios of six ministers.

His move drew criticism from constitutional experts and political leaders who pointed out that as per Article 76 (7) of the Nepalese constitution the House could be dissolved only when an alternative government was not possible. But Oli’s riposte was that he commanded majority in the 174-strong Parliamentary NCP and therefore, there was no possibility of forming an alternative government. Moreover, dissolving a House and calling for fresh elections were “political” decisions and not “legal” decisions which could be challenged in court, he asserted.

However, others say that as per Article 77 (1) (c) of the constitution, the office of Prime Minister becomes vacant if he or she ceases to be a member of the HoR and the HoR had been dissolved.

Oli feels that even if the Supreme Court disallows dissolution and restores the HoR, he could still form a government with the Nepali Congress and the Janata Samajbadi Party. He does not mind stepping down from the Premiership if fresh elections are held soon. He is cocksure of winning. He is already busy forming a new alliance sans the NCP faction led by Prachanda. He is in friendly talks with the Nepali Congress leader Sher Bahadur Deuba and Janata Samajbadi Party leader Baburam Bhattarai.

Oli had categorically said many times that he could not continue his alliance with Pushpa Kamal Dahal alias Prachanda. He had dissolved the HoR only to break the alliance.

However, Oli and Deuba are strange bedfellows, as are Oli and Bhattarai. While Oli is a communist with pro-China leadings, Deuba and Bhattarai are Center-Left with pro-India leanings. Moreover, only recently, both Deuba’s Nepali Congress and Bhattarai’s Janata Samajbadi Party had held demonstrations against the dissolution of the HoR. But politics make strange bed fellows.

Moving Away From China

Oli has been moving away from China ever since the Chinese tried to press him to continue with his alliance with Prachanda, who is a Maoist. The Chinese, who had encouraged the merger of Oli’s Communist Party of Nepal (United Marxist-Leninist) and Prachanda’s Communist Party of Nepal (Maoist Center), wanted unity between the two pro-Chinese Communist Parties to continue. But Oli told off the mediating Chinese envoy, Hou Yanqi, that Nepalese leaders were fully capable of tackling their problems. While Prachanda never wanted to split the NCP, Oli was repeatedly saying that he would rather part ways. He sought an “amicable separation” before the matter took a serious turn.

Oli then buried the hatchet with India and entertained visits by several Indian dignitaries. The Indian Intelligence Chief Samant Goel (who carried a special message from Indian Prime Minister Narendra Modi) came in October 2020;  the Indian Army Chief, Gen. M.M.Naravane came in November 2020; and the Indian Foreign Secretary Harsh Vardhan Shringla visited later in the same month. . Oli will be sending his Foreign Minister Pradeep Gyawali to New Delhi for talks on January 15.

This was a complete about turn by Oli, as earlier in May, he had had a row with India over his claims to three places on the Nepal-India border, namely,   Lipulekh, Kalapani, and Limpiyadhura. He included these territories in the new official map of Nepal.

India also wanted to bury the hatchet. Despite his pro-China and communist predilections, Oli had links with the West also. He had signed the US Millennium Challenge Corporation Compact (MCC) against opposition from his ultra-left colleagues and was pressing the HoR to ratify it.

China Reaches Out To Nepali Congress

Meanwhile, the Chinese saw the writing on the wall and started befriending Nepali Congress leader Sher Bahadur Deuba. At the end of 2020, the Chinese sent a high power delegation to Kathmandu to meet Nepalese leaders.  Guo Yezhou, a Vice-Minister in charge of the Communist Party of China’s foreign department, met all the key leaders but significantly extended an invitation to Deuba from Chinese President Xi Jinping to visit China on the 100th anniversary of the Communist Party of China.

China’s political profile in Nepal has been on the rise in recent years with billions of dollars of investments under its multi-billion-dollar Belt and Road Initiative. These include the Trans-Himalayan Multi-Dimensional Connectivity Network. For the first time, China’s external aid and development agency, China International Development Cooperation Agency (CIDCA) is making a foray into Nepal, pledging to finance 15 pilot development projects in 13 northern districts of the country. The project has been named “Northern Region Border Development Programme”.

In a deal signed by Nepal and China in 2014, China had agreed to provide 10 million yuan ($1.63 million) annually from 2014 to 2018 to help Nepal develop its northern districts bordering China’s Tibet Autonomous Region. Fifteen of Nepal’s 77 districts share borders with China’s Tibet Autonomous Region. The aid was spent in the health, education and road sectors.The CIDCA is executing other projects like improvement of Araniko Highway and the Ring-Road Improvement Project (Phase II).

Observers say that China does not like the movement of Indian and Western donors in the north due to the sensitivity of the Tibetan issue. With China investing in the northern region, Nepal may not permit other donors to invest in the north.