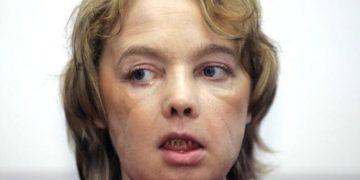 Frenchwoman who got world’s first face transplant dies at 49

Frenchwoman who got world’s first face transplant dies at 49 Sept 7 – Isabelle Dinoire, a Frenchwoman who received the world’s first partial face transplant, has died more than a decade after a complex and daring operation that set the stage for dozens of similar transplants worldwide. She was 49.

The hospital said Dinoire died in April, but didn’t announce it until Tuesday because the family wanted to mourn privately.

After being severely disfigured by her pet Labrador, Dinoire was given a new nose, chin and lips in a groundbreaking, 15-hour operation in 2005 led by doctors Bernard Devauchelle and Jean-Michel Dubernard in the Amiens hospital. When she first appeared in public with her new face four months later, her speech was slurred and a scar clearly visible but the fact that she could speak to reporters of having a “face like everyone else” and almost smile was seen as a medical breakthrough.

Set the stage for face transplant

Soon afterward, doctors discovered a malign tumour, according to Tuesday’s statement. Independent doctors who followed her case said she had lung cancer that might have been linked to her treatment, or to her lifetime of smoking.

The operation changed Dinoire’s life and drew international attention. There have been 36 face transplant surgeries around the world since 2005, including one last year in New York that was the first to include a scalp and functioning eyelids.

Of the 36, six have died, the Amiens hospital noted.

“Facial transplants remain extremely complex surgery with high risk,” it said. “It’s important to remember that face transplants are still in the evaluation stage. They … cannot be considered a routine activity.”

Dinoire, a divorced mother of two teenage daughters, said she was wrestling with personal problems at the time of the 2005 dog attack and “took some drugs to forget.” She said she was passed out when the dog bit her.

Disabled by her disfigurement, she welcomed the opportunity for a transplant from a brain-dead woman. Her doctors said they repeatedly warned her of the risks involved.

Dr. Bohdan Pomahac, director of plastic surgery transplantation at Brigham and Women’s Hospital in Boston, met with Dinoire in 2008 as his team was preparing its first face transplant, and called it a “really profound experience.”

“She seemed to be speaking perfectly fine, she ate with us. Like a normal person,” he said.

Pomahac noted that face transplant recipients are about twice as likely to reject the new tissue as hand transplant patients. But he remains convinced that transplants are right for some patients who “have no other options.”

Dr. Vijay Gorantla, administrative medical director of the Reconstructive Transplant Program at University of Pittsburgh Medical Center, said Dinoire never regretted the transplant publicly, and her quality of life improved. “She didn’t want to be a recluse … or a monster in public.”

Gorantla said surgeons should not be in a race to perform transplants but should carefully weigh the risks and benefits. “We are still learning” with each new case, he said.

Meningaud, who has been involved in seven of France’s 10 face transplants, is now arguing for suspending the procedures altogether so that the medical community can take stock of whether the long—term benefits are worth the physical and psychological toll they take on patients.

In Dinoire’s case, “the results were very good in the medium term, but the long-term results were not so good,” Meningaud said.

“It’s a rather high price to pay for the patient. It’s time to mark a pause,” he said.

A year after the surgery, doctors said Dinoire was gaining more and more sensitivity and facial mobility, and she got herself a new dog.

“I can open my mouth and eat. I feel my lips, my nose and my mouth,” Dinoire said at a news conference in 2006.

“I have a face like everyone else,” she said. “A door to the future is opening.”