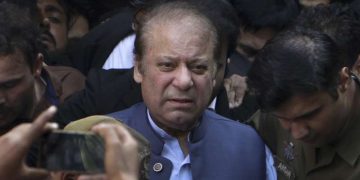 © ASSOCIATED PRESS FILE - In this Oct. 8, 2018, file photo, former Pakistani Prime Minister Nawaz Sharif leaves after appearing in a court in Lahore, Pakistan. Sharif, who was convicted of corruption, has left the country and is traveling to London for medical treatment. (AP Photo/K.M. Chaudary, File)

London, September 20 (International The News) – Former prime minister Nawaz Sharif is set to break his political silence today (Sunday) with an address live from London to the all parties conference (APC) in Islamabad after accepting an invitation from the Pakistan People’s Party (PPP) leader Bilawal Bhutto Zardari.

Hussain Nawaz confirmed that arrangements have been made for Nawaz Sharif’s appearance and speech to the APC and he will be addressing the conference around noon Pakistani time. Nawaz Sharif’s addresses to the APC will be his foray into Pakistani politics after arriving in London in November 2019 for medical treatment.

Hussain suspected that Nawaz Sharif’s speech may not be shown on TV under the government pressure, but said it has become impossible to stop anyone’s message from being going out in this age and day.

Hussain Nawaz said: “Pakistani media has been forced not to show speeches by Nawaz Sharif, Maryam and other PML-N leaders, but their message has always gone out through Nawaz Sharif’s strong support base. His message is so powerful that the government has reacted in panic with warnings to the media. The government has proven again it feels threatened from Nawaz Sharif but it’s not in control of the government to stop Nawaz Sharif’s message. It will reach to millions of people through his supporters.”