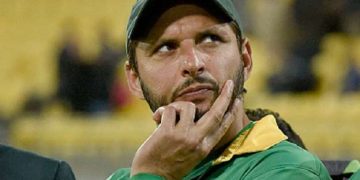 June 13 (News18) Former Pakistan cricketer Shahid Afridi has tested positive for the novel coronavirus and announced this by taking to social media on Saturday afternoon.

The swashbuckling all-rounder tweeted, “I’ve been feeling unwell since Thursday; my body had been aching badly. I’ve been tested and unfortunately I’m covid positive. Need prayers for a speedy recovery, InshaAllah”

Earlier in May, Afridi had bought a cricket bat auctioned by Bangladesh’s Mushfiqur Rahim in a bid to raise funds to help fight the battle against the coronavirus pandemic.

Afridi, on the other hand, took to his official social media handle to confirm the news. He hoped that this small token will help building bigger bridges. “Cricket is to bind. In the divisive world of today, we must look forward to better tomorrow; its always upto us to take 1st step. @SAFoundationN believes human suffering & empathy is beyond borders.Hope this small token will help building bigger bridges.#DonateKaroNa #HopeNotOut,” Afridi wrote.

The former Pakistan skipper has helped thousands of poor with ration and other essential supplies over the past couple of months. His works had even received the backing of Indian cricketers Yuvraj Singh and Harbhajan Singh, though the relations later turned sour.