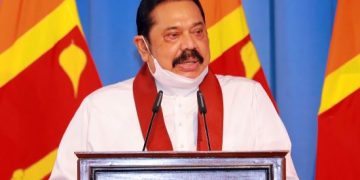 Former members of the armed forces will be part of Rajapaksa governments, says Prime Minister

Former members of the armed forces will be part of Rajapaksa governments, says Prime Minister

Soldiers are part of the warp and woof of Lankan society along with Buddhist priests, native doctors, teachers, farmers and workers, Prime Minister Mahinda Rajapaksa said. Colombo, May 18 (newsin.asia): The Sri Lankan Prime Minister Mahinda Rajapaksa has said that the war hero (Ranaviru)  is now part of the warp and woof of Sri Lankan society along with the Buddhist priest, the native doctor, the teacher, the farmer and  the worker.

Therefore, former members of the armed forces will be part of governments run by the Rajapaksas, the Prime Minister said in his message on the eve of the 11 th anniversary of the victory over the separatist Liberation Tigers of Tamil Eelam (LTTE) on Monday.

It was on May 19, 2009 that the final Eelam War IV officially ended with the killing of the LTTE chief Velupillai Prabhakaran in the Nandikadal lagoon, Mulliwaikkal, Mullaitivu district.

“The Ranaviru constituency is now an integral part of the Sangha, Weda, Guru, Govi, Kamkaru social line up of former times. So, whenever we happen to be in power, there will always be former members of the armed forces and police holding various positions in the government,” Mahinda Rajapaksa said.

When the LTTE was defeated in 2009, Mahinda Rajapaksa was Sri Lankan President and the present President Gotabaya Rajapaksa was Defense Secretary. President Gotabaya was also in the army as a Lt. Colonel before he took voluntary retirement to migrate to the US. He came back to be Defense Secretary to oversee the conduct of Eelam War IV as he was a dual citizen. He subsequently renounced his American citizenship to stand in the 2019 Presidential election.

Prime Minister Rajapaksa went on to say that the “armed forces and police that amazed the entire world by winning what was widely considered to be an unwinnable war, are now once again engaged in a joint operation with the state health sector in combating Covid-19.”

“All indications are that Sri Lanka is winning the battle against Covid -19 as well. The frontline role played by the armed forces and police in working with the general public, has undoubtedly been of immense help to the health sector in bringing the spread of Covid-19 under control in the present manner.”

“This once again reminds all of us that the armed forces and police are the sentinels of the nation, ensuring the safety of the general public in all crises whether man-made or natural – whether the crisis be terrorism, floods or disease.”

Condemns Denigration of the Military Personnel

Condemning the opposition parties’ denigration of the armed forces and its personnel Mahinda Rajapaksa said: “In this context, I wish to condemn in the strongest possible terms, the attempt being made by the Yahapalana political parties to create an artificial social dichotomy between military and civilian.”

“ On this 11th Anniversary of the war victory that amazed the whole world, I wish to reiterate that the manner in which the Yahapalana government betrayed our armed forces internationally and the vicious manner in which they persecuted both retired and serving members of the armed forces have not been forgotten. We once again pledge that justice will be done to all those who faced humiliation and persecution under the Yahapalana government.”

Not A War Against Tamil People

Prime Minister Rajapaksa went on to say that the war was not against the Tamil people but against an organization designated by the Federal Bureau of Investigation as the deadliest terrorists in the world.

“Due to the defeat of the LTTE, Tamil people are now free to live as they wish. Tamil children are no longer forcibly recruited by the LTTE. Tamil politicians no longer live in fear of LTTE assassins. Furthermore, due to the absence of the LTTE, elections can be held in the Northern and Eastern provinces and that has safeguarded the sovereign rights of the people of those provinces,” he pointed out.

However, in the Tamil dominated areas in North and East Sri Lanka, May 18 is observed as a day of mourning. Known as  “Mullivaikkal Day”, it marks the time when thousands were killed in the final stages of the brutal war. Mulliwaikkal, a narrow strip of land and beach between a lagoon and the Bay of Bengal, was where LTTE chief Prabhakaran laid down his life as many hapless Tamils were killed.

Annually, political leaders and the kith and kin of the dead make a beeline to Mulliwaikkal to light torches and mourn. But this times, due to COVID-dictated social distancing requirements, political leaders had asked Tamils to plant trees and light lamps in their houses.

Factionalism To The Fore

This time round, an interview given to a Sinhala language website by former Tamil National Alliance (TNA) MP M.A.Sumanthiran came in for vicious flak. He had said that he and the TNA did not believe in an armed struggle. His critics pointed out that the in the past, the TNA had formally recognized the LTTE as the “sole representatives of the Tamils”. They condemned him for betraying the Tamil struggle and demanded his ouster from the position of TNA spokesman.  But the opposition guns went silent Sumanthiran answered his critics point by point and challenged them to publicly declare that they believe in an armed struggle now.