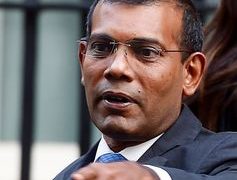 Male, February 5 (newsin.asia): Former Maldivian President Mohamed Nasheed has appealed to India to “act swiftly” to prevent the deterioration of the crisis in his country which he fears would be a security threat to the Maldives and the Indian Ocean.

In a statement issued by him on Monday from the UK m,where he is a refugee, Nasheed said that he is engaging India and the other members of the international community in this regard.

Nasheed, who heads Maldivian Democratic Party (MDP), said that he spoke to the embattled Chief Justice Abdulla Saeed who expressed grave concern about the “breakdown of institutions and the Rule of Law” in the Maldives.

Nasheed described the 15-day State of Emergency declared by President Abdulla Yameen as the declaration of “martial law” and asked Maldivians not to obey the new orders as these are illegal.

The former President said that the Yameen government cannot interfere with the judiciary as per Art 141 of the constitution as all judicial power is vested in the Supreme Court and other courts.