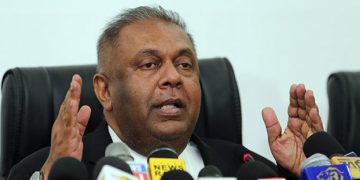 The parliament was dissolved to enable the  government to hold fresh elections on April 25 but the coronavirus pandemic  had led to the indefinite postponement of the elections.

In a statement issued on Thursday,  Samaraweera said: “ In challenging times, it is also constitutionally proper to have the people’s representatives meet to steer the country through these perilous waters. Section 70(7) of the Constitution, which empowers the President to convene Parliament in an emergency, exists for precisely such an eventuality. Mr. President, I believe it is your duty and responsibility to ensure that Sri Lanka has a legislature at this time of emergency.”

“Even if Parliament, on public health grounds, cannot meet as a full House, there are other alternatives. The minimum quorum for Parliament to meet is 20. By mutual agreement, those twenty members can reflect the composition of Parliament. For example, in New Zealand, a Parliamentary Select Committee will function throughout the lockdown to ensure the Government remains accountable to its citizens,” he pointed out.

He then went on to give the reasons for convening parliament.

“Without Parliament, the government is fighting the virus and its effects with one-hand tied. Without legislative approval, the debt-ceiling cannot be raised to provide economic relief. Nor can any other economic relief measure involving government revenue or expenditure.’

“The Pre-Election Budgetary Position Report has just been published. That too is welcome. But it contains an insidious affront to democracy. It states that the Government intends to prepare what it calls a ‘Vote-on-Account’ using the powers of Section 150(3). First, Section 150(3) does not grant the President powers to prepare a Vote-on-Account. There can be no Vote-on-Account without a vote in Parliament. Section 150(3) of the Constitution clearly specifies that the President’s powers to draw on the Consolidated Fund after Parliament is dissolved is limited to funds necessary “for the public services”. In other words, funds necessary for paying the salaries of government servants and keeping the government running. “

“Second, the Pre-Election Budgetary Position Report’s stated intention to prepare a so-called ‘Vote-on-Account’ without a vote, usurps the Vote-on-Account voted by Parliament. The Parliament sanctioned Vote-on- ends on 30 April. However, the Pre-Election Budgetary Position Report states that the government intends to prepare a so-called ‘Vote-on-Account’ for March, April and May. It is unacceptable that a vote in Parliament, which the Constitution says “has full control over public finance”, could be overturned by Presidential decree. I will release a detailed statement on this matter in the coming week.”

The PM said,: “Under Article 150(3) of the Constitution, the President is vested with the power to allocate funds from the Consolidated Fund to maintain state services after Parliament has been dissolved. Hence the public should not entertain any fears about the availability of funds for the anti-Coronavirus campaign and to maintain other government services.”

The full text of the PM’s statement:

On the day that a countrywide curfew was declared to prevent the spread of Coronavirus – Friday the 20th March 2020 – UNP Leader Ranil Wickremasinghe issued a media release stating that the previous government led by him had not passed a Budget for 2020 but that they had passed only a Vote on Account which would last till the 30th April 2020. He contends that therefore, after the 30th of April 2020, the present government would not have the legal right to allocate funds for any purpose whatsoever. Former opposition leader Sajith Premadasa has also been repeatedly making the same assertion via the social media.

Under Article 150(3) of the Constitution, the President is vested with the power to allocate funds from the Consolidated Fund to maintain government services after Parliament has been dissolved. Hence the public should not entertain any fears about the availability of funds for the anti-Coronavirus campaign and to maintain other government services. Last month on the 20th February, when we tried to move Parliament to allocate funds to pay the arrears owed by the yahapalana government to the suppliers of essentials such as medicines and fertilizer and to ensure the smooth supply of these goods, the opposition led by Sajith Premadasa which had a majority in Parliament blocked it so as to make it impossible for the new government to ensure the smooth running of the day to day affairs of the country.

We were able to allocate the funds necessary to maintain essential services only due to the powers over government finance that the President assumes under Article 150(3) of the Constitution after the dissolution of Parliament. In a situation where there wasn’t a single Coronavirus infected patient in the country, the President dissolved Parliament on the 2nd March 2020 under Article 70(1) of the Constitution. Ten days later, when Sri Lanka’s first Coronavirus patient was discovered, the opposition led by Sajith Premadasa demanded the postponement of the election. Article 70(5) of our Constitution requires that the Gazette notification dissolving Parliament should also state the date on which the poll would be held and the date on which the newly elected Parliament would meet for the first time. Once such a proclamation has been issued, the President does not have any power to postpone the poll. Under Section 24(3) of the Parliamentary Elections Act No: 1 of 1981, the Elections Commission is vested with the power to postpone the poll due to unforeseen circumstances or an emergency. The Elections Commission has postponed the poll accordingly.

The postponement of the date of the poll does not in any way change the financial powers vested in the President under Article 150(3) of the Constitution after the dissolution of Parliament. It can be seen that the two factions in the UNP are vying with one another to make political capital out of the Coronavirus epidemic. The entire country witnessed the manner in which former Opposition Leader Sajith Premadasa tried to sabotage the anti-Coronavirus campaign by giving encouragement to the Sri Lankan expatriate workers who made a commotion at the airport refusing to be quarantined. Because they failed to cut off funding for the new government using their majority in Parliament, an attempt is now being made to achieve that result by concocting legal arguments about the financial powers vested in the President at a time when Parliament has been dissolved.

We unreservedly condemn this attempt to sabotage the work of the government and the anti-Coronavirus campaign in the midst of the most serious epidemic that this country has ever faced. Despite such conspiracies against the nation launched by opportunistic elements, medical professionals, nurses and other hospital staff, members of the armed forces and all those engaged in the provision of essential services have been working day and night to bring the Coronavirus epidemic under control. I take this opportunity to express my appreciation and heartfelt thanks to them all.