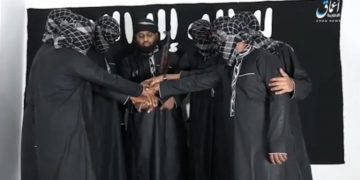 Colombo, May 15: The Sri Lankan government on Tuesday announced the proscription of three Islamic State (IS) affiliates, namely, the National Tawheed Jamaath (NTJ), the Jamaathei Millathu Ibrahimee Seylani (JIMS) and the Wilayath as Seylani (WAS).

The first two were publically identified soon after the April 21 Easter Sunday suicide attacks in the island nation which resulted in 253 deaths. But the Wilayath as Seylani (WAS) was named only on Tuesday in the list of proscribed organizations.

The government is yet to give details of the Wilayath as Seylani and its operations in Sri Lanka.

According to Dr. Rohan Gunaratna, a co-author of “The Three Pillars of Radicalization” (Oxford University Press 2019),  the Islamic State’s Caliphate has not formally declared the formation of WAS though its formation is on the cards.

“The matter is being discussed at the IS Caliphate. The plan may have been to declare its formation if anti-Muslim violence continues in Sri Lanka and an excuse exists for the formation of a separate Wilayath for Sri Lanka,” he said.

The term Wilayath refers to a “province”. Since 2014, the IS has set up Wilayaths or provinces in various parts of the world. These Wilayaths are not conventional provinces but fields of IS operation. Among the IS’s Wilayaths in South Asia are Wilayath Khorasan (covering Afghanistan and Pakistan) and  Wilayath al Hind (covering India with the nerve center being located in Kashmir). To this has been added Wilayath as Seylani ( Seylan is the Arabic name for Sri Lanka).

According to Dr.Gunaratna, Mohammad Zahran, the leader of the NTJ who carried out the suicide bombing of Shangri- La hotel in Colombo, had been wanting to set up an IS Wilayath in Sri Lanka.

Zahran was the leader of the NTJ and JMIS and possibly Wilayath as Seylan also as he was the most outstanding Islamic State leader in Sri Lanka..

Communal clashes, with the majority community staging mob attacks against Muslims, would have paved the way for the realization of terrorist Zahran’s dream.

“It is therefore very important for the government of Sri Lanka to ensure that there are no communal clashes and that Buddhists, Christians and Muslims live harmoniously and side by side in safety and security,” Dr. Gunaratna said.

The Lankan government was probably aware of the discussions going on at the highest levels in the IS Caliphate about forming WAS and had banned it in anticipation.

The IS, along with its local Sri Lankan affiliates, had showed its prowess by daringly carrying out a carnage in the Sri Lankan capital  as well as places outside, and that too simultaneously.

The intricacy and the scale of the operations, the wide network the terrorists had built up in utter secrecy, and the enormous funds they had at their disposal, indicate that they can do great damage over a large area and prepare for the task over a long period of time without being found out.

What Mob Violence Can Do

Dr.Gunaratna said that the Lankan security forces have been able to unravel and neutralize the network set up by Zahran. Therefore there is no immediate possibility of the April 21 type of terrorist attacks being staged, he said. But the threat will come from another factor – the alienation of Muslims.

“The threat that Sri Lanka is facing now comes from mob attacking Muslims. Such incidents will alienate the Muslims and eventually create the ground for the reactivation or creation of Islami State outfits,” Dr.Gunaratna warned.

“The military and the police should not hesitate to open fire on unruly mobs as a deterrent to others who might want to join in to loot and destroy,” he added.

“Terrorist attacks do not destroy a country but riots do,” Dr.Gunaratna pointed out.

He was probably harking back to the anti-Tamil riots in July 1983 which exacerbated the ethnic issue in Sri Lanka and made it intractable for decades.

The Singapore-based scholar, who has written on the LTTE and  also a best seller on the Al-Qaeda, said that the formation of Willayaths in Afghanistan, Pakistan, India, and now Sri Lanka, makes it imperative for South Asian  nations to pool their intelligence together and fight the IS in a united and coordinated manner.

“India and Pakistan may have their political differences but they should sink these differences to fight the common enemy IS, for the sake of the survival of the South Asian region as a whole,” Dr.Gunaratna pleaded.

He pointed out that the IS, which was thought to have been crippled and driven out of the Caliphate of Iraq and Syria in 2014 by the forces of the Western alliance, is alive and kicking. It intends to strike at various places across the globe.

Giving recent examples of the depredations of the IS, Dr.Gunaratna said: “On October 14, last year, a IS cell was unearthed in  Malaysia which revealed plans to attack Hindu and Buddhist temples and Churches. In May 2018, a Church was bombed in Surabaya in Indonesia killing at least 11 people. In January this year, the IS bombed a cathedral in Jolo in the Philippines, killing at least 20 people. In April came the suicide attacks in Sri Lanka in which 253 perished.”