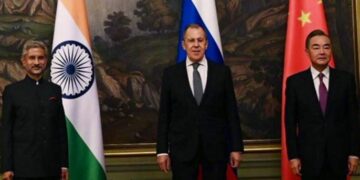 Foreign Ministers of India, China and Russia call for “reformed” or “true” multilateralism

Foreign Ministers of India, China and Russia call for “reformed” or “true” multilateralism Colombo, November 27 (newsin.asia): Search for true multilateralism, and issues in climate change and COVID management, have brought India, China and Russia together. The three countries have reached a consensus on these issues, signaling the emergence of a new grouping outside the US orbit.

The Foreign Ministers from China, Russia and India on Friday agreed to enhance coordination and cooperation in order to jointly deal with global challenges such as the COVID-19 pandemic, climate change and terrorism, the China Daily said.

According to the Indian Ministry of External Affairs, Foreign Minister S.Jaishankar said in his opening remarks that the ministers would discuss  topical issues such as: (i) Fight against Covid-19 pandemic, (ii) Reforms of the Multilateral System and (iii) International Hot-spot Issues.

“At the outset, I would like to thank my colleagues from Russia and China for their support and cooperation during India’s chairmanship since September last year. I also take this opportunity to specially thank the Think-Tanks from Russia and China for actively participating in the RIC Academic Conference held in video-conference format under India’s chairmanship in April this year,” he said.

“Let me, dear colleagues, reaffirm India’s continued commitment to foster closer dialogue and cooperation among the three largest nations in the Eurasian region under the RIC mechanism. I believe that our cooperation in areas like trade, investment, healthcare, education, science & technology and politics etc could significantly contribute to global growth, peace and stability. This would be in line with our common ethos of recognizing the “World as a Family”. Our approach to global development should be human-centric and not leave anyone behind.”

“The COVID pandemic has shown the interdependence of an inter-connected world. The need of the hour is, therefore, “One Earth One Health”. That means a timely, transparent, effective and non-discriminatory international response to global health challenges including pandemics, with equitable and affordable access to medicines and critical health supplies.”

READ: How the British looted books & manuscripts from Ceylon

“Since joining the UN Security Council as a non-permanent member in January this year, India has been actively contributing to finding mutually acceptable solutions to international and regional issues. We believe that a multi-polar and re-balanced world based on sovereign equality of nations and respect for international law and contemporary realities requires Reformed Multilateralism,” Jaishankar said.

“As a contiguous neighbor and long-standing partner of Afghanistan, India is concerned about the recent developments in that country, especially the suffering of the Afghan people. India supports an inclusive and representative government in Afghanistan as also other provisions of UN Security Council Resolution 2593. In line with our commitment to the well-being of Afghan people, we have offered supply of 50,000 MT of wheat to Afghanistan to address the drought situation. RIC countries need to work together to ensure that humanitarian assistance reaches the Afghan people without hindrance and without politicization. It is necessary for the RIC countries to coordinate respective approaches on the threats of terrorism, radicalization, drug trafficking etc,” Jaishankar said in conclusion.

According to China Daily the Chinese Foreign Minister Wang Yi said:  They also agreed that the three countries, which have global influence, should support and practice true multilateralism.

China, Russia and India should oppose all forms of zero-sum games and attempts to stir up a “new Cold War”, Wang said.

“The three countries are expected to lead the global community to strengthen solidarity and mutual trust, as well as explore a new path of state-to-state relations featuring dialogue and partnership rather than confrontation and alliance,” he said.

Facing the common challenge of the coronavirus, Wang said China, Russia and India should share anti-pandemic information and experience, taking joint measures to minimize the risk of cross-border transmission, and enhance cooperation on drugs and vaccines.

In addition to pandemic control, Wang also called for China, Russia and India to advance economic recovery, promote liberalization and facilitation of trade and investment, maintain a stable and smooth industrial chain, and oppose any discriminatory practices.

Wang said he hopes that the three countries will deal with hot spot issues through negotiations. Speaking of the situation in Afghanistan, he said that they could work to encourage the international community to build a united front against terrorism to prevent Afghanistan from becoming a hotbed and safe haven for terrorism again.

READ: Sri Lankan President says many unpopular decisions will have to be taken for country’s future

Reporting on the talks TASS said that the Russia-India-China (RIC) format has contributed to building a multipolar world order and rule of international law, and is a key global and regional policy factor, Russian Foreign Minister Sergey Lavrov reported on Friday at the online meeting of the RIC foreign ministers.

“The RIC format remains one of the key factors of global and regional policy, recognized in ensuring security, improving the architecture of transnational relations in the Asia-Pacific region as well as promoting broad economic integration in the Eurasian space. The development of our ‘troika’ is an integral part of the process to shape a more just and democratic multipolar world order with UN coordination. In addition, it contributes to establishing such universal values as multilateralism, equality, and the rule of international law on the world arena,” Lavrov explained.

Lavrov stressed that Russia, India, China are united by the repudiation of trade protectionism and politically motivated unilateral sanctions. In addition, they reject the use of force in international affairs. “We have been working together on an extensive agenda on the UN platform within the framework of the G20, BRICS, and the SCO. We support ASEAN-centered cooperation mechanisms in the Asia-Pacific region,” he added.

According to him, given the circumstances of the ongoing pandemic, the system of international relations has faced daunting challenges in the field of socio-economic development. “The virus triggered a crisis in global management. A rise in protectionist and isolationist views has become a serious test of strength for countries and multilateral associations,” Lavrov pointed out.

“Today’s exchange of opinions on the most pressing issues on the international agenda is of great importance amid the increasing turbulence globally and regionally. I hope that our compelling dialogue will contribute to the fuller development of the vast and truly strategic potential that the RIC format has,” the top diplomat concluded.