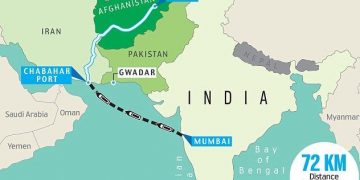 Chabahar (Iran), December 24: The first meeting of the Follow-up Committee for implementation of the trilateral Chabahar Agreement between India, Afghanistan and Iran at the level of Joint Secretary/ Director General was held on December 24, 2018 in the port city of Chabahar in Iran.

On the occasion, India Ports Global Limited company opened its office and took over operations at the Shaheed Behesti port at Chabahar.

Positive and constructive discussions were held between the three sides on full operationalization of the Trilateral Transit Agreement for international transit & transport through the Chabahar Port. They agreed on the routes for the trade and transit corridors between the three countries.

It was agreed to finalize at the earliest the Protocol to harmonize transit, roads, customs, and consular matters. It was agreed to allow cargo movement at Chabahar using TIR Convention provisions.

It was decided to hold an event to promote and popularize the potential of Chabahar on 26 February 2019. Also, a study would be initiated for determining measures to make the route attractive, decrease logistic costs and pave the way for smooth operationalization of the Chabahar Agreement.

The next Follow-up Committee meeting, followed by the 2nd Coordination Council Meeting the level of Secretaries/ Deputy Ministers, will held in India in 2019.