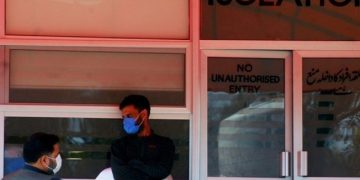 Men wear protective mask as a preventive measure against coronavirus, as they stand outside the Isolation ward at the Pakistan Institute of Medial Sciences. Photo: Reuters

March 17 (The Express Tribune) – The first death due to the ongoing global coronavirus pandemic was reported in Pakistan on Tuesday, confirmed the Ministry of National Health Services.

The under-treatment patient was hospitalised in a health facility in the provincial capital of Lahore. Punjab, till now, has eight confirmed cases.

Punjab Health Minister Yasmin Rashid said the patient was brought to a hospital in critical condition, and that he had a history of travelling from Iran where most of the 195 people got the infection.

There are a total of 195 confirmed COVID-19 cases in Pakistan as of now, and the country has witnessed a rapid increased in the number of infected over the last 36 hours.

On March 13, Prime Minister Imran Khan chaired a meeting of the National Security Committee (NSC) to cobble a unified approach to contain the outbreak.

It was decided to close borders with Iran and Afghanistan, allow only three airports – Karachi, Islamabad and Lahore – to operate international flights in limited numbers while other airports will see domestic flights, and ban public gatherings.

The National Disaster Management Authority (NDMA) has been tasked to coordinate with provincial governments and lead the fight against novel coronavirus. It was also decided to close all educational institutions until April 5.

The Pakistan Day parade on March 23 has also been cancelled.

In Khyber-Pakhtunkhwa, the education institutions have been closed till April 5 and suspended wedding activities around the province.

Balochistan has also limited activities and closed educational institutions until the end of March.