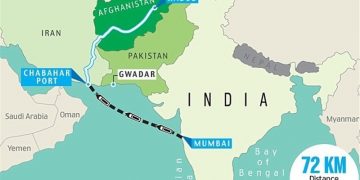 The first shipment from Afghanistan through Chabahar contained 570 tons of Afghan exports includes 130 tons of mung dhal and 440 tons of Talc.

On 29 October 2017, the first wheat shipment from India to Afghanistan through Chabahar Port in Iran reached Zaranj province in Afghanistan.

The shipment was part of a commitment made by the government of India to supply 1.1 million tons of wheat for the people of Afghanistan on a grant basis. In May 2016, India, Iran and Afghanistan signed an agreement for the establishment of a Transit and Transport Corridor among the three countries using Chabahar Port as the regional hub for sea transportation.

“With the opening of the Chabahar route, Afghanistan’s exports will increase from the current US$ 1 billion to US$ 2 billion next year” Mohammad Ashraf Ghani, President of Afghanistan had said.

On Wednesday, the Afghanistan Consulate General in Mumbai with the cooperation of JN port organized a ribbon cutting ceremony for the first Afghan shipment to India via Chabahar.

Consul General Sharifi said that “Chabahar is no more an imagination but a reality, which gives direct sea access to Afghanistan, and boost trade and economic cooperation in the region”.

Vivek Johri stated that “the arrival of first Afghan shipment through Chabahar is a momentous event and will increase the economic relation between two countries.”