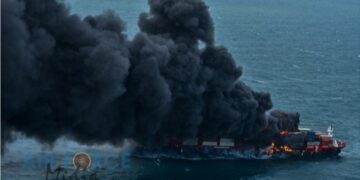 Fire onboard vessel off the Colombo harbour intensifies: explosion reported

Fire onboard vessel off the Colombo harbour intensifies: explosion reported Colombo, May 25 (NewsWire) – An explosion has been reported from inside the MV X-Press Pearl which is located off the coast of Colombo.

A fire broke out on the container vessel carrying chemicals nearly 9.5 nautical miles off the coast of Colombo on Friday (21). Read more

The Sri Lanka Navy said the fire had broken out due to a chemical reaction on the vessel which was en route to Colombo from a port in Gujarat, India. Measures were thereafter taken to contain the fire.

However, an explosion was reported today after which the fire on the vessel had intensified.

The Sri Lanka Navy said all 25 crew members onboard the vessel have been rescued while two among them have been hospitalised with serious injuries.

Eight containers on the vessel are also reported to have fallen off the ship into the sea.

The Sri Lanka Navy said the vessel is currently in the seas off the Colombo Port and measures are underway to contain the fire.