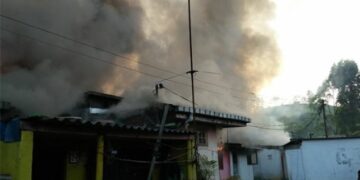 Colombo, August 10 (Adapted from www.journo.lk): Periodic fires in their miserable line room colonies add to the woes of Sri Lankan plantation workers, who are already the poorest segment of Sri Lankan society.

“So far, lines with 320 dwellings have been burned. Apart from this, we have information from our register that 1535 units have been affected by other disasters in the last five years,” said the Norwood Pradeshiya Sabha chairperson Kulantaivelu.

Living in congested, tiny, and closely-built colonial-era “line rooms”, the Indian Origin Tamil workers are in constant danger of losing everything if a fire breaks out. Conditions in the workers’ lines are such that a mere  spark can turn into a conflagration in minutes, engulfing whole rows of houses.

The cause of fires varies, but commonly, they are due to bad wiring, misuse of electrical gadgets and the absence of fire-fighting facilities. Admittedly, there have been many fires destroying luxury mansions as fire does not discriminate on the basis of class or social status. But the luxury mansions have the exclusive privilege of getting fire engines to douse even a minor fire.

In the Sri Lankan hill country, the line rooms where workers reside are commonly referred to as ‘Layam’ as they were initially set up to tie horses. This itself shows that the line housing system is unsuitable for human habitation.

Due to the persistent demand for detached houses, the 2015-2019 Yahapalanaya (Good-Governance) government decided to abolish the Line-housing system and build separate, decent houses. In spite of many difficulties and problems, separate housing schemes were implemented in some places. And detached houses were handed over to some. But there are still building sites where work had not progressed beyond the first few steps.

The worrying question is whether, after spending over 150 years in line-houses, the workers will be able to live in separate, detached houses, ever in their lifetime.

Though cooking gas has entered line room kitchens, firewood is still the main fuel. Firewood is stacked in a loft under the roof called  ‘attal’ (or paranai). There will be no need to keep the firewood here if there is a place outside to store firewood. But there is no other place.

When there is fire in a house, firewood on the loft catches it instantly. Before long, the whole house is gutted. And because the line rooms are built cheek by jowl, fire spreads to the neighboring houses and then to the whole line of houses.

One of the main causes of the fire in the plantations is the electrical system in the houses which are in poor shape and badly laid out. The systems employed had not been updated for decades. Estate administrations or the divisional secretariats responsible for the area had been turning a blind eye to this.

“If one house is on fire and all the houses will be on fire. All this is because we live in adjoining line houses. We will be relieved if separate houses are built for us. How can be we do that with the meager salary we get? Are we to look after ourselves, our children or to repair the burnt houses? Even this house was built with our small savings. Why should we suffer like this?,” a resident asked with tears in his eyes.

And a student said: “Our house was on fire and all our books were burnt. How do we continue our education? All of our documents were burnt. We do not have any documents, including birth certificates and the family bank deposit book.” This is not the experience of a single person but of thousands in the plantations.

The Norwood Pradeshiya Sabha chairperson Kulantaivelu said that after getting electrical connection to the lines, most residents install the electrical connections in their line rooms as per their convenience and preference. But such connections are often insecure. Further, most of the line households overuse electrical appliances or are carelessness in usage. This often causes fires , he said.

It is a pity that the fire brigade does not have permission to operate in the upcountry. However, a large fire brigade had rushed to the scene of a recent small-scale fire that broke out at a State Minister’s residence in  Wavendon Estate. If the fire brigade can rush to a hotel located in an estate, why can’t it rush to the workers’ quarters? This is a serious matter the Pradeshiya Sabha must pay attention to.

It is customary for those who witnessed or heard of a tragic situation to feel sympathy for a day or two. They can do little else. But the area politicians and officials should provide immediate and also long term relief to the victims. Simply promising to build houses in or around them is of no use.

The practice of giving away some money as a temporary relief to the affected families continues in the upcountry. Yes, they had lost their clothing, important documents, jewelry, money due to the disaster and desperately need such help. But they also have to reconstruct the eight-foot by eight-foot living room with a small amount of savings they have. They neither get help from neighbors nor a foreign relief organization. Such incidents push them into a deeper abyss.

Commenting on this Norwood Pradeshiya Sabha chairman Kulantivelu said: “We have provided temporary relief to the affected people. At the same time, we have been in talks with the relevant estate administrations to provide them with alternative accommodation and have taken steps to acquire places and provide detached houses.”

However, it added that it is making short-term arrangements with the district secretariat to evacuate the victims to safer places.

A small fire incident can ruin the future of a community. There are fire affected families which have been living in temporary shelters for many years. There are many families who have been sheltered in defunct tea factories. The suffering these face cannot be described in words.

There should be a proper assessment of fires and landslides in the hilly plantation areas. Planning alternative actions should be based on it. Planning and systematically implementing the elimination of line-rooms should be undertaken simultaneously.