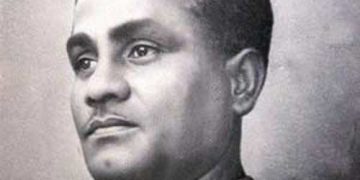 New Delhi, August 29 (NIA):  In the context of India’s returning from the Rio Olympics with just two medals, none of them gold, and the government’s waking up to the dire need to encourage sports in the country, the  demand for the award of Bharat Ratna, the highest national honor, to India’ one and only Olympic star, hockey wizard Dhyan Chand, is timely.

Dhayan Chand, who helped India bag three successive Olympic Golds, in 1928, 1932 and 1936, had got the Padma Shri and  Padma Bhushan, and his birthday, August 29, is observed as National Sport Day. But the highest national award, Bharat Ratna, has evaded him, despite persistent efforts by hockey enthusiasts to get him the Bharat Ratna, albeit posthumously.

On Sunday, a day before India celebrates National Sports Day on his birthday, several former hockey greats came together in New Delhi to reiterate the demand, reports The Hindu.Led by Dhyan Chand’s son and World Cup winner Ashok Kumar and former India captain and Rajya  Sabha MP, Dilip Tirkey, the assembled Olympians hoped that the Central Government would take note of Dhyan Chand’s achievements and confer the honor on him.

“I feel there is discrimination against Dhyan Chand, discrimination against hockey and there is a general discrimination between sports. When he played hockey, it was for the love of the game and to make India proud on the international stage and not for any personal benefit. He played when there were no rewards for winning. We request the Government of India to rectify this shortcoming at the earliest,” Tirkey said.

Ashok said it was sad they have to demand honor for someone who did so much for the country.

“Every year there is this discussion whether Dadda (as Dhyan Chand was known) would get it or not. I think it is disrespectful for someone of his stature. I don’t know why we have to even ask for it, the government should have itself taken a decision on this long ago. Players like Dhyan Chand are rare and [we] request and expect the government to not neglect such people,” he said.

In 2013, the then Sports Minister Jitendra Singh had recommended Dhyan Chand as the first sports recipient for Bharat Ratna, but cricketer Sachin Tendulkar was chosen instead.

“It was good to hear Prime Minister Narendra Modi talk about dadda in his Mann Ki Baat address. It shows he acknowledges the greatness. So I am hopeful (that the Bharat Ratna would be given this time),” Ashok said.

Modi had said “Major Dhyan Chand was an example of the true sportsman spirit and patriotism” and noted that great players from other games like cricket also used to praise Dhyan Chand.

“In 2014 also PM Modi had supported our cause but it hasn’t worked out so far. Dhyan Chand is on par with Don Bradman in cricket, Mohd. Ali in boxing and Pele in football. Even players from other sports agree he deserved the Bharat Ratna before anyone else,” Zafar Iqbal said.

Former captain Ajitpal Singh added that for anyone who knew anything about sports, Dhyan Chand’s name would automatically be on the top of the list of people who deserved Bharat Ratna.

“That didn’t happen, but it should happen now. I don’t want to compare players. But Dhyan Chand played when India was not even an independent nation and yet he put India on the world stage. That must be recognized by the government,” Singh said.

Several former internationals flew in from across the country to join the demand including M.K. Kaushik, Ashish Ballal, A.B. Subbaiah, Mohammed Riaz, H.J.S. Chimni and Mukesh Kumar. Renowned sand artist Sudarshan Pattnaik presented an artwork on the occasion in support of the demand.

When India was thrashing Germany in front of a home crowd at the Berlin Olympics in 1936, with Dhyan Chand being the stop scorer in the  8-1 rout of Germany, Fuhrer Adolf Hitler walked  away from the stadium in a huff to avoid witnessing his country’ humiliation. Nevertheless, he expressed a wish to meet the Indian captain. To Dhyan Chand’s surprise, Hitler offered the high rank of Colonel in the German armed forces as an incentive to accept citizenship. But the proud Indian politely declined the offer.

Back in India, Dhyan Chand continued to serve the Indian army in which he had enlisted when he was a just 16 and in which he discovered his talent for hockey. Gradually rising in rank, he retired as a Major in 1956.

Dhyan Chand’s  goal-scoring feats were out of the world. So much so that he was called “The Wizard” for his uncanny talent. Seeing his dribbling skills, fans fondly called him a “magician with the stick”. Opposition teams often broke open his stick to check if there was something magical hidden in it.

Dhyan Chand was born in Allahabad to Sameshwar Dutt Singh. Shameshwar worked in the British Indian Army where he played hockey, and the son followed suit, joining the force at 16 after just six years of schooling. Dhyan Chand was so passionate about hockey (which at the time was basically an army sport in India), that he used to practice at night after duty. For this his earned the nickname “Chand” or moon.

From 1922  onwards, he started playing for the Indian army. He was part of the army team which toured New Zealand in 1926. This team won 18 matches out of 21 played in New Zealand and Dhyan Chand was greatly appreciated for his performance. On return to India, he was promoted from the rank of Sepoy to Lance Naik.

When field hockey was reintroduced in the 1928 Amsterdam Olympics and the Indian Hockey Federation (IHF) wanted to send its best team for the event, Dhyan Chand with his great performance in the nationals, secured a place in the team. At Amsterdam, India beat the Dutch, German and Belgian teams in the pre-Olympic matches by huge margins. Chand scored three goals in India’s debut Olympic match against Austria, which India won 6-0. India also won the matches against Belgium, Denmark and Switzerland on its way to the finals.

In the finals held on May 26, 1928, India faced Netherlands, the home team. Some of India’s top players were on the sick list and the team’s chances looked bleak. However, the team managed to beat Netherlands 3-0 to win its first Olympic gold. Dhyan Chand emerged as the hero of the 1928 Olympics by scoring 14 goals in five matches. . A news report about India’s victory said: “This is not a game of hockey, but magic. Dhyan Chand is, in fact, the magician of hockey.”

For the 1932 Los Angeles Games, Dhyan Chand was an automatic choice. His brother Roop Singh also secured a place in the team. India’s first match in the 1932 Olympics was against Japan which it won 11-1. This proved to be a good omen as India went on to win many other matches before triumphing in the finals to clinch the gold once again.

After the Olympics, the team went on an international tour covering United States, England and several other countries. By the end of the tour, India had won 34 matches out of 37 with Dhyan Chand scoring 133 of the 338 goals scored by India.

It was then that he was made Captain of the Indian hockey team, to lead it in the 1936 Berlin Olympics. There too he worked his magic and team won the gold, its third in a row. After India’s first match at the 1936 Berlin Olympics, people watching other sporting events thronged to the hockey stadium. A German newspaper carried a banner headline: “The Olympic complex now has a magic show too.”  The whole city of Berlin had posters: “Visit the hockey stadium to watch the Indian magician Dhyan Chand!”

A statue of this hockey legend with four hands and four sticks was erected in Vienna depicting his mastery over the ball.

Dhyan Chand was supremely confident of his abilities and when once he was unable to score in a match, he argued with the match referee about the measurement of the goal post. To everybody’s amazement, he was right! The goal post was found to be in contravention of the official minimum width prescribed under international rules.

By then a legend, Dhyan Chand continued playing hockey till the late 1940s and retired from the army as a Major in 1956. He became a coach after his retirement. During his long sporting career he had scored more than 1,000 goals out of which 400 were in internationals.

Sadly, the last years of his life were spent in penury and misery. Largely forgotten, he was lonely and died of liver cancer in 1979 at the age of 74.