WATCH : The most expensive over in Test history

As Adani steps up mining, villagers to be displaced third time

The company, which is less than a year old, was launched by five youngsters, fresh out of school, who have an ambitiuous plan for comic lovers. Selling retail designs such as t-shirts, sketch books and posters which include designs of comic characters as its centerpiece, Faniacs hopes to reach out to the younger generation who craze such characters.

With comic icons such as Captain America, Wolverine and Batman becoming a star attraction all over the world, the designers at Faniacs produce quality original designs which portray these characters.

“We started Faniacs to reach out to the Sri Lankan youngsters who have a craze for comic characters. We are a group of five boys with a passion of making a comic lovers’ dream come true,” Moiz Mustafa, part of the Faniacs team told NIA.

With all five boys, hailing from Colombo, the team hopes to become a fully fledged company one day. Till then, the boys aim to work ambitiously to win the hearts of its audience. Although presently the team is concentrating on comic icons, Moiz said they hope to launch its original designs by next year in order to become a ‘brand’ in the country.

“All our t-shirts, posters and sketch books are unique and original, designed exclusively by us. There is a lot of work that goes into creating one design but with the dedication and talent of the team we are able to provide quality products to our customers,” Moiz said.

Their original designs which they hope to launch will be ‘unique’, ‘stylish’, and ‘hip’. The designs will be targeted for the younger generation.

The Lanka Comic Con that took place in Colombo last month saw Faniacs sell out their posters and sketchbooks. The positive response received boosted the image of Faniacs. 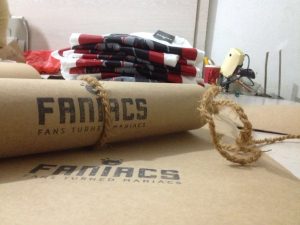 “In the future, we hope to become a brand. There is so much scope in this country and so much talent amongst the younger generation. We hope to make our mark in the Sri Lankan market soon,” Taher Sajjadhussain, another Faniacs’ member said.