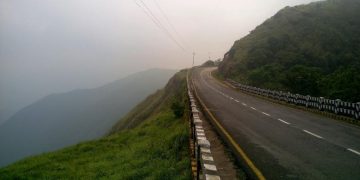 Faced with Chinese threat, India to spend US$ 1.4 billion on road building in North East

Faced with Chinese threat, India to spend US$ 1.4 billion on road building in North East Shillong, December 16 (Hindustan Times): In a significant development in the context of China’s road building activity and digging in at Doklam on the Bhutan-Tibet border, Indian Prime Minister Narendra Modi on Saturday announced Rs 9000 crore (US$ 1.4 billion) for improving roads and national highways in the Northeast in  the next two to three years to facilitate better connectivity.

The Prime Minister said this while dedicating a 271-km two-lane national highway connecting Tura in western Meghalaya and Shillong.

Meghalaya was the second stop of the prime minister after Mizoram during his day-long visit to the Northeastern region today.

He said the central government has sanctioned around 4,000-km of national highway (NH) across the Northeast at a cost of Rs 32,000 crore.

The Prime Minister said that over 1,200 km of NH was constructed at an expenditure of nearly Rs 14,000 crore during the last three years alone.