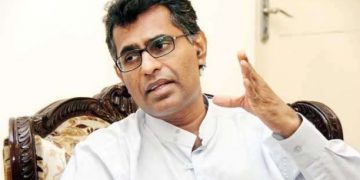 Japan is not known to have used its development assistance to mount unhealthy and unfriendly economic or political pressures, former Megapolis minister Champika Ranwaka said in his letter to Prime Minister Yoshihide Suga In a letter dated October 12, Ranwaka said: “ As a responsible national leader, and the then minister who initiated and spearheaded the commencement of this Japan-funded vital LRT project, which was well on course to become a high-impact, strategically prudent and financially sound intervention in the ever congesting national transport system of Sri Lanka, I wish to extend this sincere apology to the government and people of Japan on behalf of the people of Sri Lanka for any inconvenience caused by the decision taken by the present government of Sri Lanka to discontinue this collaborative project.”

“Sri Lanka has an ever congesting national transport system, particularly in Colombo and suburbs, with the steadily increasing ‘national cost of mobility’ accounting for well over a staggering 12% of the country’s GDP (at the time the study, in 2016), which has already entered into a gradually worsening vicious cycle of congestion-induced retardation of national economy–that could potentially lead to a phenomenal collapse similar to what was experienced by some Asian economies in the late 1990s.”

“lt is in this context, and indeed at a time when the problem was relatively less acute that, through JlCA-funded study carried out during 2008-2012 ( a combination of interventions was identified including Bus Rapid Transit (BRT), Bus Modernization, Railway Electrification, Double Line Railway and a Monorail system).

Subsequently, during 2015-16, in a second detailed study carried out jointly by Japanese and Sri Lankan experts under the ‘ComTrans’ urban transport Masterplan, the LRT solution was identified as the highest impact strategic intervention, which could be complemented by BRT and Bus Modernization et cetera. Seven LRT corridors were identified, finally narrowing down to four, with the most congested Kaduwela-Fort corridor as the highest priority.”

“ JICA granted the funding for the project at a highly concessionary interest rate of 0.1% per annum (and the consultancy component at 0.01%) with a 14-year grace period and a 40-year payback period.”

“This was against a backdrop where the infrastructure financing of Sri Lankan Government during the preceding decade had mainly come in the form of international commercial debt secured at typical interest rates as high as 6-7% with 5 year payback.”

“Working in collaboration, the then Ministry of Megapolis and Western Development and JICA managed to complete all of relevant feasibility studies, conclude the loan agreements and launch the protect within two years–a record of speed and efficiency for a JICA funded collaboration of similar magnitude anywhere in the world.”

“The project was progressing well on course to realizing its primary goal of commencing the transfer of 30,000 passengers per hour per direction between Malambe and Fort by 2024, thereby bringing about a phenomenal reduction in traffic congestion in the city. And this is the project that the current government of Sri Lanka has decided to abruptly discontinue for reasons perhaps best known to them.”

“Japan has always been a true friend of Sri Lanka throughout the past 70 years. lndeed, Japan remained Sri Lanka’s largest development partner for a long time, stood by Sri Lanka’s interests at important international fora, and is not known to have traded its development assistance with unhealthy and unfriendly economic or political pressures. The Peoples of the two Nations have always held each other in the highest spirit of mutual friendship and respect.”

“ln this backdrop, I wish to extend to the government and people of Japan my sincere apologies for any inconvenience caused to Japan due to the decision taken by the present Sri Lankan Government to discontinue this vital collaborative project. I hope the mutual friendship and cooperation between the two countries, and the two peoples, will remain close and cordial.”