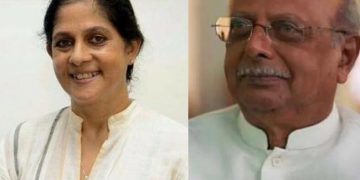 “The manifesto had obtained overwhelming public endorsement in the recent Presidential election. It is my intention to carry out the programs and policies outlined in it,” Yahampath said.

Prof. Tissa Vitharana has been named the Governor of North Central Province. The two new Governors were sworn-in on Wednesday.

The Yahampath family has been a leader in the Sri Lankan handlooms sector for more than four decades having over 200 handlooms, 30 power looms, and a fully equipped dye house. Over 300 women have been trained to work from home forming a network of self-employed weavers.

Their Kandygs brand has buyers in ten countries, spanning Europe, Asia and Australia. Following her mother’s footsteps, Anuradha joined Kandygs following her degree in Textile Design from University of Leeds (UK). Anuradha’s flair for design and commitment to being Eco friendly is demonstrated through the exclusive use of natural dyes in the manufacture of Kandygs fabrics.

She is passionate about reviving local handlooms as a village based industry, and has successfully set up a pilot project in Ihala Madampella in the Gampaha district with assistance from the Ministry of Economic Development.

Anuradha pioneered the use of bamboo yarn in Sri Lanka to manufacture handloom fabric. These products have been well received in overseas markets and is the first step towards establishing a fabric industry based on bamboo yarn.

Anuradha is currently leading the effort to bring in investors to support bamboo cultivation and yarn manufacture. In recognition of her work, she was awarded Silver for Most Innovative Exporter by NCE.

A nationalist to the core, Anuradha Yahampath has been a senior member and star speaker of an intellectuals’ and professionals’ organization set up by Gotabaya Rajapaksa. She spoke on the sidelines of the 37 th.session of the UN Human Rights Council (UNHRC) in Geneva in defense of Sri Lanka.

A medical doctor, researcher and a leftist, Tissa Vitharana was born 30 August 1934 in Nuwara Eliya. He was head of the virology department at the Medical Research Institute from 1972 to 1994. Vitharana was a consultant virologist at the Edinburgh City Hospital’s Regional Virus Laboratory in the 1980s. He was deputy director of the Victoria Infectious Diseases Reference Laboratory in Melbourne from 1991 to 1993. Following retirement in 1994 Vitharana was a professor of microbiology at the University of Sri Jayewardenepura from 1995 to 2000 and an advisor to the Minister of Science and Technology from 1994 to 2001.

Vitharana joined the Lanka Sama Samaja Party (LSSP) in 1974.The Communist Party of Sri Lanka CPSL and LSSP joined the UPFA in February 2004. Vitharana was appointed as a National List Member of Parliament following the 2004 parliamentary election.

He is the current leader of the Lanka Sama Samaja Party (LSSP), a member of the United People’s Freedom Alliance (UPFA).