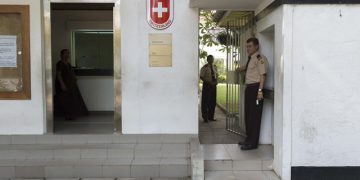 Share on WhatsApp
Colombo, Dec. 5 (newsin.asia) — Sri Lanka’s Foreign Ministry, yesterday said that following investigations conducted so far into the alleged detention of the Swiss Embassy employee, they believed that there was very little truth in the allegation leveled by the ‘so called victim’ and this may be misinformation to sling mud against the political leadership of the country.
Foreign Minister Dinesh Gunawardena told journalists in a media briefing that foreign envoys in Colombo had yesterday been briefed about the investigations of the alleged incident so far including the fact that the alleged victim had to date, failed to give a statement or present herself in front of the investigators.
However the foreign envoys were assured that further investigations would continue into the alleged incident.
The government has been informed through the Swiss Ambassador in Colombo, that the alleged victim and her family are in a safe place and Gunawardena said there had been a request by the Swiss government to fly the alleged victim out of the country in an air ambulance due to claims of her deteriorating health.
However the Foreign Ministry has informed the Swiss officials that the victim would have to follow the due procedures before leaving the country.
Gunawardena further said that with the information the police had received so far of the incident, it was heavily shrouded in contradictions.
“By all the facts given to the CID so far, it is totally contradictory to her movements that day,” the Minister said.
“We feel this is another step of misinformation, to throw mud at the political leadership of this country. Just before the elections, the political leadership faced similar accusations. However President Gotabaya Rajapaksa, as the head of state has vowed to protect the dignity of the country whilst maintaining cordial ties with all nations and the Foreign Ministry will maintain openness in this matter,” the Minister said.
He further said that following the court order issued on Tuesday, imposing a travel ban on the alleged victim and ordering her to give her statement before Dec.9, they hoped the alleged victim would come forward and provide her statement.
“We have assured the victim’s protection and also the protection of her family to the Swiss Ambassador,” Gunawardena said.
On allegations that the alleged victim had been sexually abused by her alleged abductors, Foreign Secretary Ravinatha Ariyasinha said that they had been informed that the alleged victim had, last Sunday been examined by video by a doctor in Switzerland who had made certain observations. But he said, the ministry had still not received any reports of the alleged victim being checked by any local doctor.
SendShare5Tweet1ShareShare