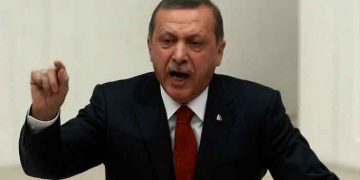 "I call on my people here. Never give credit to French-labelled goods, don’t buy them," he said during a televised speech in Ankara on Monday.

by Editor
in Around The World, Religion, World
Reading Time: 2 mins read
1 0 “I call on my people here. Never give credit to French-labelled goods, don’t buy them,” he said during a televised speech in Ankara on Monday.

Erdogan’s remarks come a day after tensions between Turkey and France escalated with the latter recalling its ambassador to Turkey after the Turkish president said Macron needed a “mental check”.

Muslims around the globe are incensed at Macron for his recent statements against Islam. The French president has referred to Islam as a religion “in crisis” and backed caricatures depicting Holy Prophet Muhammad (PBUH).

For Muslims, any depiction of Holy Prophet Muhammad (PBUUH) is seen as an insult and deeply offends the community.

Erdogan repeated his suggestion of Macron needing a “mental check” today as well, calling on European politicians to put an end to Islamophobia.

“European politicians should say ‘stop’ to the hate campaign led by French President Macron,” he said. He called on world leaders to “protect Muslims together”.

This is not the only issue that has widened the rift between Turkey and France. Macron and Erdogan have disagreed and traded barbs over tensions in the eastern Mediterranean, the war in Libya and the conflict in Nagorno-Karabakh recently.

The prime ministers of Italy, the Netherlands and Greece also expressed support for France, as did European Commission president Ursula von der Leyen.

Macron has called for tougher laws in France to keep, what he likes to describe as, “Islamist separatism” in check.

The anti-Islam statements from the French president emerged after a teacher was beheaded in France last week when reports emerged he showed insulting cartoons of Prophet Muhammad (PBUH) to a class.

Macron offended Muslims worldwide when he said, in response to the incident, that France will “not give up our cartoons”.

Earlier, the BBC reported that the French president intends to posthumously give the teacher France’s highest award, the Legion d’Honneur.

In a series of tweets on Saturday, the prime minister, while presenting examples of the iconic leader Nelson Mandela, said that this is a time when President Macron could have put the healing touch and denied space to extremists rather than “creating further polarisation and marginalisation that inevitably leads to radicalisation”.

“It is unfortunate that he has chosen to encourage Islamophobia by attacking Islam rather than the terrorists who carry out violence, be it Muslims, White Supremacists or Nazi ideologists. Sadly, President Macron has chosen to deliberately provoke Muslims, incl his own citizens, through encouraging the display of blasphemous cartoons targeting Islam and our Prophet (PBUH), the premier wrote on Twitter.

Condemning that by attacking Islam, Macron has hurt the sentiments of Muslims around the world, PM Imran had said that the last thing the world wants or needs is further “polarisation”.