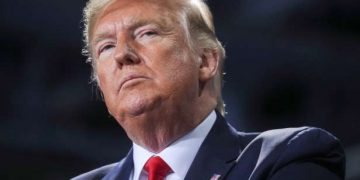 Fight-wing Norwegian politician Christian Tybring-Gjedde put the US president forward for a nomination.

by Editor
in Around The World, United States, World
Reading Time: 1 min read
1 0 © Leah Millis/Reuters U.S. President Donald Trump has been in office since Jan. 20, 2017. Take a look at his journey, from being a successful real-estate mogul, to a reality television star, to becoming the 45th head of state of the nation.

September 9 (Evening Standard) – Donald Trump has been nominated for a Nobel Peace Prize after helping broker a peace deal between Israel and the United Arab Emirates.

Fight-wing Norwegian politician Christian Tybring-Gjedde put the US president forward for a nomination.

He told Fox News that it relates to the “historic peace agreement” between Israel and the United Arab Emirates.

“For his merit, I think he has done more trying to create peace between nations than most other Peace Prize nominees,” he said.

In his nomination letter, Mr Tybring-Gjedde said the Trump administration played a critical role in the establishment of relations between Israel and the UAE.

He wrote: “As it is expected other Middle Eastern countries will follow in the footsteps of the UAE, this agreement could be a game-changer that will turn the Middle East into a region of cooperation and prosperity.”

The politician also cited the president’s “key role in facilitating contact between conflicting parties and … creating new dynamics in other protracted conflicts, such as the Kashmir border dispute between India and Pakistan, and the conflict between North and South Korea, as well as dealing with the nuclear capabilities of North Korea.”

A nomination for the Nobel Peace Prize may be submitted by anybody who meets the nomination criteria.

A person is eligible to nominate another if they are a members of national assemblies, national governments, a previous prize winner or university professors among others.