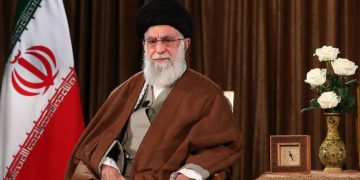 "You may send us medicine that will make the virus last, and it is not unlikely" Ayatollah Khamenei said Tehran, March 22 (Tehran Times):  Ayatollah Seyyed Ali Khamenei, Leader of the Islamic Revolution, said on Sunday that the United States’ proposal to provide Iran with medical aid to fight the coronavirus may be a conspiracy as the United States is accused of producing the virus and it is said that part of the virus was produced to infect the Iranian people.

In this speech, which was broadcast live on television networks, he addressed the Iranian New Year, Noruz, and Eid al-Mab’ath and extended congratulations to the Iranian people and all the Muslims of the world.

Ayatollah Khamenei said, “Mab’ath is an important day. This is the day when God assigned his great prophets to believe in the Prophet of Islam and help him. Helping him means to introduce him to their followers, and ask the followers to believe in him.

He added that “the name and characteristics of our Prophet have existed in undistorted Torah and Gospel and his name also has been mentioned by Prophet Jesus.”

He further referred to Islamic concepts and values and said, freedom, human dignity, social justice are among Islamic values and concepts.

“I have said many times that the country needs to be strong. This is our main goal, and this is taken from the Quran because it says how strong you can be. We need to be powerful. It’s not just military power, it’s much broader than military power. economic, scientific, political, propaganda power.”

“Today, preserving the young population of the country is one of the tools of power and if I emphasize on fertility because our young generation must grow. In a country where young people are scarce, progress is slow,” Ayatollah Khamenei added.

“Today, power is vital in cyberspace. The cyberspace is dominating the lives of people all over the world. Power in health is significant, which thank God Iran has made great efforts in this regard,” he highlighted.

“The surge in the production I raised this year is one of the tools of power. The surge in production requires government bodies to perform their duties including the fight against corruption.”

He further noted the outbreak of the Coronavirus and said, “Today most countries are involved with the virus. Some admit it, but some countries hide it. Although the virus may cause problems, we must be patient with observing the health protocols and guidelines to resolve the problem.”

“So far, Americans have said several times that they are ready to provide Iran with medical assistance. That’s one of those weird words. They want us to import medicine from them, first of all, Americans have their own shortage of facilities and pharmaceutical equipment. Both in the prevention and in treatment, they are terribly deficient. Second, the United States is accused of producing the virus. I do not know how true this claim is if it is true why we should trust them and get help from them.”

He addressed the U.S. leaders, “You may send us medicine that will make the virus last, and it is not unlikely. You may send physicians for treatment so they can see the effects of the virus in Iranian society and complete their information and increase their hostility. It is said that part of the virus was produced against the Iranian people.”