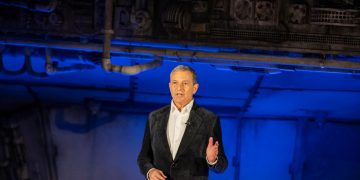 by Editor
in Around The World, Entertainment, World
Reading Time: 5 mins read
2 0 Feb 26 (Tech Crunch) – The Walt Disney Company announced this afternoon that Robert Iger, the company’s long-time CEO who ushered in the company’s lush franchise and entertainment platform profits, will step down immediately as chief executive. Bob Chapek, a long-time senior exec at the company who most recently held the position of chairman of Disney Parks, Experiences and Products, will succeed him.

Chapek, as head of Disney’s Parks Division, was a somewhat divisive figure in that he led with a “value engineering” (the Imagineering word for trimming cool stuff) and budget conscious strategy instead of the more popular “let Imagineers do the most” tactic that has produced some of the parks’ most enduring rides and experiences. Disney Twitter has been quick to descend upon the Chapek choice as a sign of possible rough times ahead for Parks budgets.

Our guess for who would head Parks is Josh D’Amaro, extremely-well liked former head of Disneyland who now heads Walt Disney World — liked by Parks people for a lot of the opposite reasons, which politically could make this a non starter, but would be a very popular appointment.

A few oddities surround this sudden change. Iger is only 14 months into a 36-month contract extension, and this comes not on a regularly scheduled earnings call but in the midst of an interesting time for Disney, as it faces parks shutdowns due to the coronavirus outbreak. Disney’s earnings have been amazing lately, which would have made for a nice two-hander at earnings time. Speculation is still high for the exact reason behind Iger’s departure, with many hoping for something benign (ish) like a presidential run versus a personal issue.

Iger will address Disney employees at 5:30EST today, and we’ll update if anything further comes of that address.

Under Iger’s tenure since 2005, Disney expanded aggressively into movies, theme parks and other entertainment verticals, culminating late last year with the introduction of the company’s Disney+ streaming service and $71.3 billion acquisition of 21st Century Fox, a gargantuan television and movie studio.

Iger oversaw such dramatic acquisitions as Marvel Entertainment a little more than a decade ago, and also bought Lucasfilm and its Star Wars and Indiana Jones series. He also helped to rebuild a partnership with late Apple founder and CEO Steve Jobs, and eventually acquired the Pixar animation studio, which Jobs had founded in 1986. Those decisions, among other aggressive media growth strategies, have given Disney a commanding role in the media universe.

As Jake Coyle noted in the AP earlier this year:

But in today’s IP-driven movie world, one studio is in a league of its own. In 2019, Disney dominated American moviegoing more than any studio ever has before — roughly 38% of all domestic moviegoing.

The year’s top five films were all Disney movies, and it played a hand in the sixth. Disney’s Marvel Studios produced the Sony Pictures release “Spider-Man: Far From Home.”

Since its launch, Disney+ itself has drawn almost 30 million subscribers, according to data released by the company earlier this month.

Iger will assume the role of executive chairman through 2021 according to Disney’s statement.

It has been no secret that Iger has been thinking about succession planning for years, but at least until recently, details had remained scant. Media analysts probed for news in Iger’s book “The Ride of a Lifetime,” which was published late last year and was a summation of his tenure at the media conglomerate and his business philosophy. Yet, finding a successor at the company has been challenging, with multiple heirs apparent departing the company when the top slot looked like it would remain locked in Iger’s grasp.

On an already heavy red-ink day, Disney stock was further hit in after-hours trading by investors. Yahoo Finance’s most recent quotes puts Disney stock down 2.57% in after-hours trading, following a 3.62% decline during trading hours stemming from the global coronavirus outbreak. Disney has significant properties in Asia, including Shanghai Disney Resort, which was the company’s first platform in China and was overseen by incoming CEO Chapek.

Today the Board of Directors announced that Bob Chapek  has been named Chief Executive Officer of The Walt Disney Company, effective immediately. I have assumed the role of Executive Chairman and will continue to direct the Company’s creative endeavors, while also leading the Board. This is an exciting day for our company, an historic day—and I’m thrilled for Bob. I’ve worked closely with him for many years and have absolute confidence in his abilities, as does the Board.

As CEO, Bob will oversee all of the Company’s business segments and corporate functions, and we will work closely together through the end of 2021 to further the Company’s strategic objectives and to ensure a smooth and successful transition.

Bob has been with Disney for nearly three decades, and during this time he has achieved stellar results across a wide array of businesses. Throughout he’s led with integrity and conviction, always respecting Disney’s rich legacy, while at the same time taking smart, innovative risks for the future. As president of Home Entertainment for the Studio, he spearheaded the highly successful “vault strategy” that brought Disney’s iconic films and characters to new generations of viewers. As president of distribution for the Studio, he directed the Company’s film distribution strategy and expanded our global reach across multiple platforms. As head of Consumer Products, he transformed the business, focusing it on our key franchises and embracing technological innovation to deliver unmatched consumer experiences. Most recently, as Chairman of Parks, Experiences and Products, he oversaw the largest capital expansion in the history of our parks that included the opening of Shanghai Disney Resort, a doubling of the Disney Cruise Line fleet, and the creation of the new Star Wars: Galaxy’s Edge lands at Disneyland and Walt Disney World. Bob has worked closely and collaboratively with leaders across the different segments of our company, and I’m confident he will apply the same vision, passion and commitment to excellence in his new role as Chief Executive Officer.

I’ve had the tremendous privilege of being CEO for the past 15 years, and it’s been thrilling for me to be part of such an exciting and productive era for our company. I’m enormously proud of all that we’ve accomplished, creatively, financially and strategically—including the acquisition of Twenty-First Century Fox and the incredibly successful launch of our direct-to-consumer businesses. With these key endeavors well underway, I believe it’s the right time to transition to a new CEO and I believe Bob is absolutely the right person to assume this role and lead our company in this next pivotal period. I am certain that under his leadership, our portfolio of great businesses and our amazing and talented people will continue to serve our company and our shareholders well into the future.

I congratulate Bob and look forward to working with him in his new role as CEO, along with the other members of our amazing leadership team.

Bob and I will hold a town hall meeting tomorrow in the Main Theatre at 9 a.m. PT. To RSVP for the theater or to view the live webcast, please click here.

My thanks and best to you all,