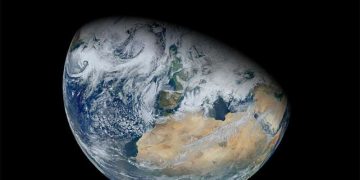 by Editor
in Around The World, Science, Tech, World
Reading Time: 4 mins read
2 0 © Provided by CNET Could we be converting our planet to data? NASA

August 14 (CNET) – As I write this, the precious metals and fossil fuels used to create and power the server farms and other infrastructure that will eventually blast these words onto your retinas are being converted to information. Eventually all those digital bits will actually outnumber all the atoms on Earth, according to one theoretical physicist.

“We are literally changing the planet bit by bit and it is an invisible crisis,” Melvin Vopson, who lectures at the University of Portsmouth in the UK, said in a release.

Vopson isn’t just talking about how all our digital technology uses up natural resources and creates planet-warming greenhouse gas emissions, although he notes that is happening too. Instead, he calculates that as the amount of digital bits we create continues to grow, they could actually outnumber the total atoms on Earth as soon as 2170 (assuming a 50% annual growth rate in digital bits created).

“The growth of digital information seems truly unstoppable,” Vopson said. “According to IBM and other big data research sources, 90% of the world’s data today has been created in the last 10 years alone. In some ways, the current COVID-19 pandemic has accelerated this process as more digital content is used and produced than ever before.”

Vopson is the author of a newly published paper titled The Information Catastrophe appearing Tuesday in the journal AIP Advances.

© Provided by CNET Vopson wants to experimentally verify that information bits have mass, which he extrapolated to forecast in 225 years will be half of Earth’s mass. Melvin Vopson

You might think he’s envisioning a future in which we’ve stripped away part of the Earth’s crust to create massive server farms and burned the rest of its mass to power them. But beyond the energy and resource depletion implications, Vopson also draws on a theory he formulated in 2019 that postulates information as a fifth state of matter.

“In fact, it was proposed that “information” is not only the fifth form of matter along solid, liquid, gas, and plasma but also possibly the dominant form of matter in the universe,” he writes.

The idea builds upon the work of Einstein and later scientists. Over the years, some have gone so far as to try to calculate the mass of a bit of information.

By Vopson’s calculations, the total mass of all the information we produce in a year is far less than a single grain of rice, or about equal to one E. Coli bacterium. But it’s the potential for growth that concerns Vopson. In an extreme scenario where the amount of digital information grows by 50% annually, half of our planet’s mass could be literally converted to bits within 225 years.

“In this context, assuming the planetary power limitations are solved, one could envisage a future world mostly computer simulated and dominated by digital bits and computer code,” his paper concludes.

It’s worth noting that IDC estimates (using different and more recent data than Vopson) that the amount of data created annually is even higher and IDC estimates the annual growth rate over the next few years to be around 26%.

That would make the 2245 scenario Vopson describes seem perhaps not as far-off and extreme.

However, David Wolpert, a physicist at the Santa Fe Institute isn’t too worried about a looming information catastrophe.

“This article considers some interesting physics issues, but since the timescales are centuries, one has to worry about the economics aspect,” he writes via email.

Wolpert offers a cheeky example to illustrate his concern with Vopson’s logic:

“To follow in [Vopson’s] spirit, the global woman’s lingerie market is expanding at an ~ 9.4% annual rate… Extrapolating that to 500 years in the future — as the authors of the article do for a different commodity — we arrive at a figure of $3 x 10^19 US$, which would obviously ruin the world’s economy (and most likely the ecosystem). The conclusion, clearly, is that we are headed for a lingerie catastrophe.”

Still, while Vopson’s ideas about information as matter have yet to be proven through experimentation, it remains worthwhile to consider just how fast our digital society is growing and at what long term costs to not just the environment, but the actual planet down to its very crust.