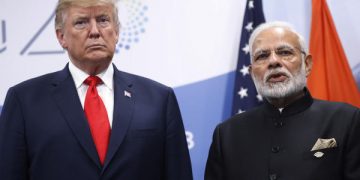 With India denying Trump’s claim about Kashmir, US-Pak talks are back to Afghanistan

With India denying Trump’s claim about Kashmir, US-Pak talks are back to Afghanistan President Trump, shown here with India's Prime Minister Narendra Modi at the Group of 20 meeting in Buenos Aires last November, will be meeting the Indian leader again at the Osaka G-20 on Friday, amid rising trade tensions.

Colombo, July 23 (newsin.asia): A quick and categorical denial by the Indian External Affairs Ministry  of President  Donald Trump’s claim that Indian Prime Minister Narendra Modi had asked him to mediate with Pakistan to end the Kashmir dispute, brought the on-going US-Pakistan talks in Washington to the brass tacks, namely, the thorny issue of Afghanistan.

Indian External Affairs Ministry spokesman Raveesh Kumar, followed by Foreign minister S.Jaishankar, categorically denied that Modi ever made a request for US mediation. They re-iterated India’s known stand that any talks on India-Pakistan issues will have to be bilateral, without third party mediation as per the principles stated in the Shimla Agreement of 1972 and the Lahore Declaration of 1999.

Kumar also stated another well-set principle that there can be no Pakistan unless it stops cross border terrorism.

A State Department tweet issued by “AGW” however tried to cover up Trump’s faux  pas saying:  “While Kashmir is a bilateral issue for both parties to discuss, the Trump administration welcomes Pakistan and India sitting down and the United States stands ready to assist.”

With India refusing to take outside help to talk on Kashmir and setting a condition on cross border terrorism which Pakistan will find difficult to meet, Islamabad’s talks with Washington have been brought down to Afghanistan, which was the principal reason for Trump’s wanting to talk to Imran in the first place.

It would have been to Pakistan’s advantage if Trump’s offer on mediation was further discussed and some concrete moves were made in that direction. Imran would have returned to Pakistan a hero. But that was not to be. The issue now is satisfying the US in Afghanistan and securing economic and military benefits from improved relations with the US, a very challenging task.

Trump needs Pakistan to get the Taliban militia in Afghanistan to maintain an agreed ceasefire; to get into serious talks with the elected Afghan regime in Kabul; and to work out with the Afghan government an inclusive Afghan peace settlement so that the US can withdraw its 14,000  troops from Afghanistan before the US Presidential election in 2020.

Trump praised Pakistan for motivating the Taliban to come to the talks table seven times so far and move towards the  “draft agreement” which was thrashed out on July 7. But Trump is keen that the momentum is kept up till peace is established de facto, and that Pakistan doesn’t go back to its old habit of saying one thing and doing another.

Trump said that the US has a better relationship with Pakistan t now, but immediately added that the future will depend on what the two sides work out during Imran’ visit.

Thus, the ball is now in Imran’s court. He has to deliver what the US is expecting from him vis-à-vis the Taliban. That however is a huge challenge for Imran because the Taliban are  among the most hardened militant groups in the world both ideologically and militarily.

Since the US President himself had said that Indian Prime Minister Modi had asked for his mediation on Kashmir, and the US State Department followed this up by saying that while Kashmir is a bilateral issue, the US is ready to “assist” bilateral talks, Modi will have to manifestly prove that he had not, at any time, entertained third party mediation and deviated from time-honored Indian policy.

This is especially needed because the opposition Congress party is asking Modi himself to explain instead of making the External Affairs Minister speak on his behalf.

All this may result in a stiffening of Modi’s stand vis-a-vis the US, Pakistan and the Taliban. India has clout over the Afghan government and India is against the Taliban. As a long-standing player in Afghanistan, India is also feeling left out in the on-going peace process. If Pakistan steps up its campaign against India on Kashmir, and Trump does carry out his plan to push for US mediation in the Kashmir dispute, India will have to put  up stiff resistance and that may adversely affect the Afghan peace process and the American bid to quit the troubled country by 2020.