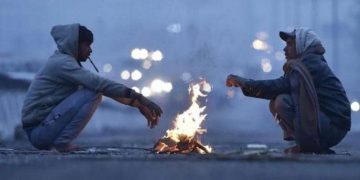 Delhi witnesses coldest November in a decade at 7.5 degree Celsius

Delhi witnesses coldest November in a decade at 7.5 degree Celsius New Delhi, November 20 (India Today) – The minimum temperature dropped to 7.5 degree Celsius on Friday morning, the lowest in 10 years for the month of November in Delhi.

On Thursday, the minimum temperature settled at 9.4 degrees Celsius in the national capital and the maximum wind speed was predicted to be 10 kmph, according to the India Meteorological Department.

Calm winds and low temperatures trap pollutants close to the ground, while favourable wind speed helps in their dispersion.

Mixing depth is the vertical height in which pollutants are suspended in the air. It reduces on cold days with calm wind speed.

A ventilation index lower than 6,000 sqm/second, with the average wind speed less than 10 kmph, is unfavourable for dispersal of pollutants.

The IMD had earlier said the minimum temperature in Delhi will drop to 9 degrees Celsius by Saturday, as cold winds have started blowing from hilly regions, which have witnessed a fresh bout of snowfall.

The minimum temperature this month, barring November 16, has remained 2-3 degree Celsius below normal in the absence of a cloud cover, according to IMD officials.