Lanka round-up: No extension of Emergency after August 18: President

Bionic hand can be updated with new gestures, anytime, anywhere

by Editor
in Around South Asia, Coronavirus, Pakistan
Reading Time: 3 mins read
16 1
A A

August 2 (IndiaToday) – Amid a surge in coronavirus cases in Pakistan, health authorities in Pakistan’s Punjab province have issued an alert following the detection of five cases of Epsilon strain of Covid-19 in Lahore, according to reports published in the Dawn.

According to some medical experts in Pakistan, as reported by the Dawn, the Epsilon variant is believed to be more resistant to Covid-19 vaccines and has been declared a new threat for vaccinated people, who may get infected again.

In a statement issued on Friday, Punjab Primary & Secondary Healthcare Department Secretary Sarah Aslam said, “Our department had collected 23 suspected samples in Lahore and five of them had been found positive for Epsilon.”

WHAT IS EPSILON STRAIN OF COVID-19?

The Centre of Disease Control and Prevention (CDC) had categorized the Epsilon variant and the related B.1.427 as “variants of concern” due to the sudden spike in cases in California.

On March 5, the World Health Organization (WHO) listed the Epsilon variant of Covid-19 as a variant of interest. On July 6, the variant was designated under ‘alerts for further monitoring’. 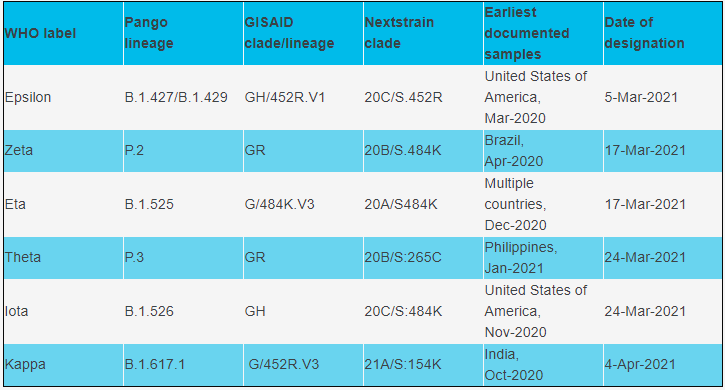 Epsilon is believed to be the second-most dominant variant in New York. First detected in California, this variant is now present in at least 34 countries across the globe.

A study by the University of Washington in the US has found that three mutations in the spike protein of the Epsilon variant help the virus evade the protection offered by current vaccines.

Like the original SARS-CoV-2 virus identified in Wuhan China in December 2019, the variant infects cells through its spike glycoprotein — the structure that crowns the surface of the virus, and helps it to infect the human cells, the researchers said.

LOCKDOWN IN KARACHI AMID COVID SURGE

In view of the recent surge in Covid-19 cases, the Pakistani authorities have imposed a lockdown in the southern Sindh province, including Karachi.

The lockdown began on Saturday and will be in place till August 8, despite opposition from the federal government and the local business community.

The Sindh provincial government has ordered the closing down of all markets, except essentials like pharmacies, bakeries, gas stations, and grocery stores, which still must close by 6 pm.

The government has halted all inter-cities transport and public buses. Only two people have been allowed in private cars and taxis

All ongoing examinations at schools and universities have also been postponed.

Pakistan on Saturday reported 4,950 new cases of Covid-19 along with 65 deaths in the past 24 hours.

(With inputs from AP)

Lanka round-up: No extension of Emergency after August 18: President