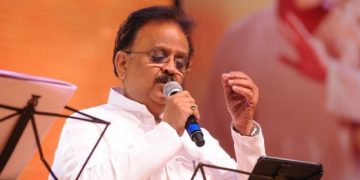 Chennai, August 14 (The Hindu): Playback singer S.P. Balasubrahmanyam, who was admitted to a hospital after testing positive for COVID-19 last week, is on life support and his condition is said to be ‘critical’.

MGM Healthcare, where he was admitted, said in a health bulletin that there had been a major setback in the singer’s health condition.

“In a late night development on August 13, his condition had deteriorated and based on the advice of the expert medical team attending to him, he has been moved to the ICU. He is on life support and his condition remains critical,” the bulletin said.

The hospital has also said that he is currently under observation by the team of experts from critical care and his haemodynamic and clinical parameters are being closely monitored.

After he was admitted, the veteran singer had put out a video saying that he had chest congestion for a few days, along with cold and fever, that led him to get tested. He had tested positive for a ‘mild’ case of COVID-19 and the hospital had then said that he had mild symptoms.

In his video, Mr Balasubrahmanyam assured friends and fans that he was doing well and that nobody needed to worry about him. At that time he had said that he expected to be discharged in a few days since his symptoms were mild.