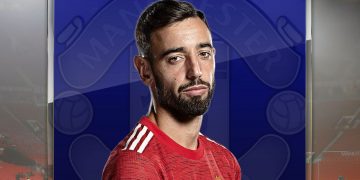 January 10 (SkySports) – Bruno Fernandes will need a rest at some point but Manchester United must find a way to cope without him. The Portuguese has scored or assisted 44 goals in 47 games so far but struggled in Wednesday’s Carabao Cup loss to Manchester City.

Rarely has a player made an impact quite like Bruno Fernandes at Manchester United. Ole Gunnar Solskjaer’s side sat six points off the top four when he arrived last year. Now they are level on points with Liverpool and talk has turned to a title challenge.

They have gone from averaging 1.4 points per game to 2.2 in the Premier League since the middle of last season and the transformation is almost entirely down to Fernandes.

In 47 appearances for Manchester United so far, the 26-year-old has scored 27 times and provided 17 assists. This season, he has been directly involved in 52 per cent of their goals in all competitions.

The numbers have prompted comparisons with Eric Cantona, whose arrival from Leeds in 1992 was swiftly followed by the club’s first league title win in 26 years.

“He came in and knitted us all together,” said Cantona’s former team-mate Paul Ince on this week’s Monday Night Football. “He was that missing piece in the jigsaw. He made everyone raise their game.”

The comments could just as easily be applied to Fernandes but Wednesday’s Carabao Cup semi-final defeat by Manchester City, during which their talisman appeared jaded and performed poorly, was a reminder that his extraordinary impact presents challenges as well as benefits.

Have Manchester United become too reliant on Fernandes? Can they cope when his level drops or he’s not in the team at all?

The danger of fatigue

Since his arrival at Old Trafford at the end of January last year, Fernandes has started 43 games of a possible 49, featuring in at least some capacity in all but two of them.

His playing time amounts to 3,764 minutes in all competitions, putting him second only to centre-back Harry Maguire at Manchester United.

Maguire’s role, however, is far less physically demanding than that of Fernandes, who brings energy and intensity to the No 10 position as well as technical guile and goal threat.

It can be seen in the Premier League tracking data which shows Fernandes has covered more ground than any other Manchester United player this season.

His total of 167km is in fact 17km higher than any of his team-mates. Across the Premier League as a whole, only 20 players have run further than him.

His recent form in the Premier League offers little evidence of fatigue. In fact there have been four goals and three assists in his last four appearances alone.

But there were certainly signs of tiredness against City on Wednesday night and, given his level of exertion, and given he only had a few weeks off between the end of last season and the beginning of the new one, that is hardly surprising.

The impact of his absence

His playing time will need to be carefully managed in the months ahead if his fine form is to continue. The need for rest is unavoidable, especially in such a congested season.

But, for reasons outlined by Sky Sports pundit Gary Neville on Wednesday night, that presents a dilemma for Solskjaer.

“With him in the team, they feel unbeatable,” said Neville. “Without him, they are nowhere near as good.

“So the one problem Ole has is that he can’t rotate. He might be able to do it in the FA Cup at the weekend. But in any game that matters, Fernandes has to play because the impact of his loss on the team is too big.”

That impact was most evident during Manchester United’s meeting with West Ham at the London Stadium in early December, when Fernandes was named on the bench and Solskjaer’s side duly produced a first-half performance described by Neville as an “absolute disaster”.

It was only thanks to Fernandes that they managed to turn it around, overcoming a one-goal deficit to win 3-1 with the Portuguese having a hand in all three goals and creating more chances from open play (eight) than any player has managed in a Premier League game for a decade – that despite only coming on at half-time.

United fans may take heart from the fact United have won the only other three games Fernandes has not started this season.

But two of those came against Luton Town and Brighton in the Carabao Cup and in the other, against RB Leipzig in the Champions League, four of United’s five goals were scored after Fernandes’ introduction from the bench.

The worry for Solskjaer is that, against Premier League opposition, the team simply doesn’t function properly without him.

“It shouldn’t be that way but it is,” added Neville. “They just can’t handle losing Fernandes.”

Solskjaer will be praying Fernandes avoids injury given his indisputable importance to the side. But the United boss can hardly complain about a shortage of alternatives in the position.

Most notably, there is Donny van de Beek, the £39m Dutchman brought to the club from Ajax during the summer.

Van de Beek has featured sparingly so far, making just two Premier League starts, the last of which ended in him being hooked at half-time at the London Stadium, but his ability is not in question. With more time to settle into his new surroundings, Solskjaer will hope to make greater use of him in the months ahead.

Van de Beek primarily operated on the right-hand side of midfield three during his time at Ajax, but he is comfortable in the No 10 position too and he certainly possesses the vision and cutting edge to create and score goals from that area of the pitch.

Those qualities helped Ajax reach the Champions League semi-finals in 2018/19. Across his final three seasons in the Dutch capital, he contributed 33 goals and 25 assists in league and European games.

Like Van de Beek, the Spaniard has been a relatively peripheral figure for United this season, but he has produced reminders of his enduring quality when called upon, most notably in the 4-1 win over Newcastle in October. There was also an outstanding display against Brighton in the Carabao Cup.

Mata’s weakness is that he cannot offer the same level of physical dynamism as Fernandes, but Solskjaer also has the option of deploying Paul Pogba as his main creator.

The Frenchman appeared to have little future at Old Trafford when his agent, Mina Raiola, announced he sees no future for his client at the club beyond this summer. But since then Pogba has returned to the starting line-up in impressive style.

He has had to adapt to different roles to accommodate Fernandes, splitting his time between the base of midfield and the left wing in recent weeks, but he would surely relish a return to a more advanced central role in the event that Fernandes is rested or unavailable.

It is down to Solskjaer to choose between those options when the time comes, but what may prove irreplaceable is the belief Fernandes’ presence inspires in the players around him.

“In those moments when you start to worry, start to panic, and the game is not going your way and you don’t know where the goal is coming from, that is when Eric would pop up and score a vital goal,” Ince added of Cantona on Monday Night Football.

“I think that is probably the same with Fernandes now. The players love him and he has got a character about him. He is a winner and it is infectious.”

Those qualities have helped Fernandes transform Manchester United. The challenge for Solskjaer now is to reduce the side’s dependency on him – and find a way to cope when he is not there.