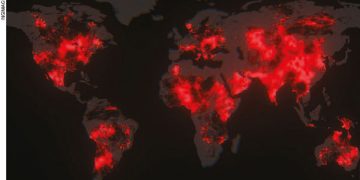 It is a disease that peppers grieving families with indignities — no funerals, hurried burials, barely a chance to mourn. September 28 (The Washington Post) – The covid-19 death toll is on the brink of hitting 1 million. That’s as many as live in San Jose, Calif.; Volgograd, Russia; or Qom, Iran.

It is a disease that peppers grieving families with indignities — no funerals, hurried burials, barely a chance to mourn. A covid-19 death is one that claims many people when they are alone, often in hospitals saturated with fear, equipped with only the barest of weapons against the bug.

From the first days of mass deaths in China, the stories forced us to avert our eyes: A 55-year-old man in Wuhan bundles up his mother and father and hustles them from one overstuffed hospital to another, searching for a bed, finding none. He takes them home and watches them die.

Two sons in Italy, desperately trying to track the condition of their hospitalized parents, get the word by phone as their mother and father slipped away, two hours and 55 minutes apart.

It is a pandemic that has divided countries from within, yet unites the world in common anguish and loss. In the United States, a son in Sacramento can only listen to a description of his mother’s burial in New Jersey via his daughter, the only relative permitted to attend.

The dead are poor — in an Indian village, a man’s family borrows a wooden cart that a neighbor used to sell fish and carries his body to his funeral pyre. And the dead are workers — in Brazil, a man who works in a meatpacking plant does everything he can think of to protect himself, yet he brings the bug home and now his wife is dead.

Across the oceans and into the biggest cities and the tiniest villages, the coronavirus has torn apart families, left children hungry, evaporated jobs and wrecked economies. Death in this time has been cordoned off from the methods all cultures use to bring people together, becoming instead a moment that keeps us excruciatingly apart.

Yet at each stop along the virus’s eight-month journey, as deaths mounted, those whose loved ones died feel compelled to tell the stories of the people they’ve lost. Even as the illness spiked, these families fought to find a way to mourn together.