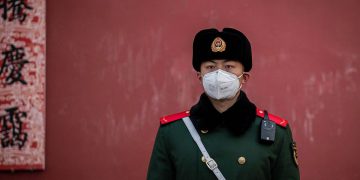 There are more than 2,000 confirmed cases of the virus, and 56 deaths, worldwide as concern mounts about the rate of its spread. Here's a rundown of what has been happening over the past few hours. A paramilitary police officer in a protective mask stands guard at the Forbidden City in Beijing Saturday.

26 Jan, (Joshua Berlinger, Brett McKeehan and Tara John, CNN) – There are more than 2,000 confirmed cases of the coronavirus, and 56 deaths, worldwide as concern mounts about the rate of its spread.

Here’s a rundown of what has been happening over the past few hours:

Outbreak in China: Some 1,975 cases were confirmed in mainland China, with full or partial lockdowns in 15 Chinese cities as authorities attempt to limit the virus’s spread. The death toll rose to 56, with all cases occurring within the country.

Contagious before symptoms: People can spread the virus before symptoms show, China’s health minister said Sunday. If he’s correct, people who did not know they are ill have been spreading the virus. A veteran adviser for a US health agency called the news a “game changer.”

Wild animal ban: The sale of all wild animals has been banned, the Chinese government announced Sunday. The outbreak, which emerged last month, has been linked to Huanan Seafood Wholesale Market in Wuhan. Authorities linked wild animals sold at the market as the likely source of the virus.

More deployments: About 1,600 medical professionals are being sent to Wuhan on Sunday and Monday, amid videos and witness accounts showing packed hospitals and overworked staff. A new, 1,000-bed hospital is also being built on the city’s outskirts, to be ready by February 3.

International spread: Confirmed cases have risen beyond China. A man in California is now the third confirmed case in the United States. Malaysia, Singapore, Thailand and Macao have all reported an increase in infections. The African continent got its first suspected case, but authorities in Cote d’Ivoire believe it might just be a case of pneumonia.

Foreign nationals evacuated: Countries, like the US, Japan and France, are attempting to transport their citizens out of Wuhan.

Anger in Hong Kong: Protests broke out Sunday over government plans to turn an unoccupied apartment building, called Fai Ming Estate, into a quarantine center. Hong Kong authorities have since rolled back on their announcement.