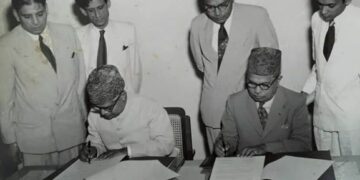 Colombo, February 23: Pakistan Prime Minister Imran Khan is expected to sign a number of MoUs with Sri Lanka on trade and investment during his sojourn here on February 23 and 24. The MoUs are expected to revive the long languishing economic relations between the two countries. The current level of bilateral trade is US$ 460 million but the desired and achievable level is much as US$ 2.7 billion.

Though volumes have always been low, Sri Lanka-Pakistan trade relations have had a long history. A firm foundation for bilateral trade was laid 70 years ago in 1951 by the veteran Sri Lankan Muslim leader T.B.Jayah when he was High Commissioner for Sri Lanka (or Ceylon as Sri Lanka was then called) in Pakistan.

If Sri Lanka and Pakistan enjoy friendly, trouble-free relations today, it is substantially due to the firm foundation laid by the amiable and multi-faceted Jayah who stayed in Pakistan for a long period overseeing the development of relations on healthy lines. He served as Ceylon’s envoy from 1950 to 1957, the longest tenure in the island nation’s diplomatic history.

Ceylon’s first Prime Minister D.S.Senanayake’s decision to send Jayah to represent his newly independent country in Pakistan was wise. That was a time when both Ceylon and Pakistan were trying to find their feet as independent nations and were building relations with other countries for the first time after the departure of the British overlords. Apart from being a senior political leader and an eminent educationist, T.B. Jayah was also an ardent supporter of the movement of the Muslims of India to set up a Homeland of their own called Pakistan (Land of the Pure).

Jayah saw no contradiction between supporting the separatist Muslim movement for Pakistan and being on excellent terms with the leaders of Indian national movement. Jayah used to fete India’s famous leaders when they visited Ceylon and even made them lecture to students of Zahira College, the premier Muslim school, which he founded and ran for many years.

The All Ceylon Muslim League (ACML), which Jayah founded and headed, campaigned for the Pakistan movement in Ceylon. The ACML held meetings and demonstrations in its support. Again he found no contradiction between supporting a Muslim separatist movement in India and being a staunch advocate of a united, multi-communal and multi-religious, independent Ceylon. Daily News once headlined a front-page story which said: ACML divides India, but unites Ceylon!

When Jayah landed in Karachi, the then capital of Pakistan, in 1950, the founder of Pakistan and its first Governor General, Mohammad Ali Jinnah, had died and Liaquat Ali Khan had become Prime Minister and de facto ruler. Having been Finance Minister of India in the pre-independence Congress-Muslim League Interim government in 1946-47, Liaquat was keen on economic development and international trade.

No wonder then, Ceylon and Pakistan negotiated the first trade agreement in 1950. It came into force on July 1, 1951, after it was signed in Karachi by Ceylonese High Commissioner Jayah and the Pakistani Trade Minister Fazlur Rahman.

Out of abundant caution, the two countries chose to be flexible and agreed that the figures envisaged were only goals. They also agreed that the quantities of agricultural products exported would be dependent on crops being normal.

Seventy  years down the line bilateral trade between Pakistan and Sri Lanka has reached US$ 460 million. But if both sides implemented the Pakistan-Sri Lanka Free Trade Agreement (PSFTA) and removed major tariff impediments, bilateral trade could go up to US$ 2.7 billion.

A SAARC study of trade up to 2018 said that a huge potential existed for developing partnerships in trade, investment and industry in various sectors and areas of mutual interest, including textiles, construction materials, agro processing, and pharmaceuticals.

Since the inception of PSFTA, trade between the two countries has shown an upward trend. The FTA between Pakistan and Sri Lanka was signed in August 2002 and came into effect in July 2005. The terms of the FTA were comprehensive and granted 100 percent immediate concession to Pakistan and Sri Lanka’s major export products.

In 2018, Pakistan’s exports to Sri Lanka reached to US$ 357 million, while Sri Lanka’s exports to Pakistan reached US$ 105 million leading to a trade surplus of US$ 252 million in Pakistan’s favor, a SAARC study said.

The study found that both countries had markets for each other’s primary products. Pakistan is an important market for tea and tea products, which also happens to be a top Sri Lankan export item. Pakistan is a significant importer of copra and rubber and both items are important Sri Lankan exports. Similarly, Sri Lanka is an important market for textile products and machinery. Pharmaceuticals along with other products that Pakistan records significant exports in, could have a market in Sri Lanka. Therefore, there exists a huge trade potential for bilateral trade.

Pakistan had made remarkable progress in its ranking in the World Bank’s Ease of Doing Business index 2020.  It went up from 136th to 108th place. It was ranked the 6th biggest reformer in the world.

According to the Pakistan High Commission in Sri Lanka, Pakistan could export into Sri Lanka Portland cement, textile products, Basmati rice, pharmaceuticals, iron and steel products, dates, electrical fans, surgical and dental instruments amongst other. There is scope for joint ventures in several sectors including tourism and hospitality, textile processing and productivity and construction.