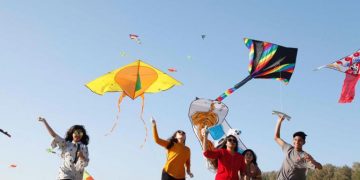 Across South Asia, kite-flying in not just a celebration but is linked to agricultural seasons. It generally takes place during December-January and September-October, two seasons that herald the completion of a harvest and the beginning of another round of agricultural activity.

According to Nikita Desai, kite-flying was originally used to predict the weather for sowing the spring crop. Farmers, with their extensive knowledge of weather conditions, used to determine the crops that could do sown by flying the kite.

Kite flying has evolved thorough ‘kite flying associations’ across South Asia. It is a part of the region’s intangible cultural heritage.

It is said that kite-flying dates back to three thousand years. Taking birth in China, it soon spread to the rest of Asia. The techniques and culture around it seem to have evolved over the years. Kite-flying has found expression through poetry as well as paintings. Preserved from the medieval times onwards, these tell us about the history of kite-flying across South Asia.

An important part of the Dashain festival in Nepal in September-October is kite-flying, which attracts tourists from various parts of the world. This event has an interesting story that connects it with Nepal’s agricultural calendar. According to folklore, kites were used to send messages to the water deity, Indra in the sky, to stop further rainfall as the rice fields were sufficiently covered for the forthcoming harvest. According to a Nepali legend, Dashain was originally celebrated in the Nepali month of Chaitra (corresponding to March-April), but as farmers were busy in the fields, it was decided that the festival would be celebrated with fervour once the rains were over and the farmers were free. Thus, the Dashain festival, held during the months of September-October, has people rejoicing with kites.

The Dashain festival marks the time when the summer harvest is completed, the monsoons are retreating, and the soil is ready to welcome the upcoming winter harvest and the winter monsoon.

Bengali Hindus perform the Vishwakarma puja in the month of Ashwin (September-October), with kite-flying as an integral part. Generally observed on September 17, the Vishwakarma festival is observed on the day of Kanya Sankranti, when the sun enters Kanya or Virgo.

The season also marks the end of a harvesting as the Dussehra or Durga Puja and Deepavali festivals soon follow. During Dussehra, kite flying is a part of the celebrations in Uttar Pradesh. People celebrate the victory of good over evil and welcome the upcoming harvest season.

Uttarayan or Makar Sankranti, corresponding to mid-January (January 14th or 15th), is the other season which has a significant association with kite-flying. This marks the transition of the sun into Capricorn or ‘Makar rashi’. It is the time when the sun begins its  journey northwards. The sun rises in Capricorn or the ‘Makara rashi.’

Gujarat is known for the International Kite Flying Festival during Uttarayan. Many cities in Gujarat organise kite flying competitions.

As in Gujarat, kite-flying during Makar Sankranti is observed with enthusiasm in many other states of India, such as Rajasthan, Maharashtra, West Bengal, Bihar, Assam, Delhi, and Uttar Pradesh.

Old Dhaka in Bangladesh has several kite-flying festivals. Though there are many kite-flying events and competitions from January to  February, the most popular festivals that include kite-flying are  Makar Sankranti and ‘Vasant Panchami’. Popular stories speak of kite flying festivals in the Bengal region dating back to the medieval Mughal era.

In Sri Lanka, kite flying is a favourite pastime for all throughout the year. But there are two major kite-flying festivals which attract tourists: One is during the Makar Sankranti festival on January 15, namely,  the Valvettithurai Annual Kite Festival held by the ‘Valvai Vikneswara community Centre’. The second is the Derana International Kite Festival, held in August-September, on Galle Face Green in Colombo.

Lahore in Pakistan is noted for its kite flying festival. It adds colour to the approaching spring. The celebration of spring, observed as ‘Basant’ however, had a slowdown after a ruling by the Pakistani Supreme Court. The court had taken note of accidents and deaths due to kite-flying. Strings coated with glass powder had proved deadly. There were electrocutions too.

Nevertheless, the celebration of spring, referred to in Urdu  as Jashn-e-baharaan, is an integral part of the

lives of the people of Pakistan.  There is a general spirit of bonhomie which is seen in social gatherings, music, food and other celebrations apart from night-time kite flying.

At the hillside park in Kabul’s Wazir Akbar Khan district in Afghanistan young people gather for flying kites. The strong winds in the location provide an ideal condition. The renowned Afghan-American author Khaled Hosseini’s best-selling novel ‘The Kite Runner’ is based on events here.

The myriad colours, kite-flying competitions and group activities provide much-needed stimuli for an occasional smile and banter amidst political problems in Afghanistan.

Hosseini’s novel is a reminder of the significance that a kite-runner occupies in kite-flying competitions. As the cut-off kite drops down and falls on to the ground, the kite-runners endanger their lives by running and rescuing it. In the process, they might overlook traffic and road-blocks and pay for their negligence. Gazing up, to trail the kite  the kite-runners run across traffic, trees, bushes and damaged roads-and get injured in the process.

Kite-flying has other challenges too. Birds may get entangled in the strong kite strings, which may be coated with glass-powder to make them strong. A study by D. Gurung, S. Dorjii, U. Tsheringi and J. Wangyal in the Journal of Threatened Taxa, (2013) speaks of the consequences to the Critically Endangered White-rumped Vulture (Gyps bengalensis) in Ahmedabad and surrounding areas in Gujarat. There is now ban on glass-coated strings in Mumbai, which was issued on December 14, 2016.

According to a folktale in Nepal, many birds were facing serious threats as a result of this favourite leisure time activity. The birds, which got entangled in the glass-powder coated strings, suffered serious injuries. They decided to meet the King to find a solution, which came to be known as ‘Treaty of Kathmandu’.

According to this ‘treaty’, kites cannot be flown during winter, spring and summer. They can only be flown when the monsoon ends and the afternoon Westerly winds starts to blow. This is the time of the Dashain festival of September-October and kite-flying occupies an important part of that occasion. It is also believed in Nepal that kite-flying brings fortune to a family and a flyer gets the forces of goodness and good luck to act on his family.