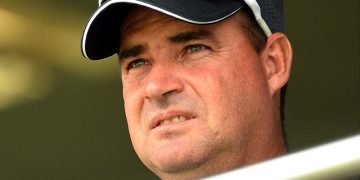 Mickey Arthur, the Pakistan team’s coach, has warned his players that they will have to raise their game “considerably” if they are to defeat England in the third Test at Edgbaston, George Dobell writes in ESPNcricinfo

Arthur, the Pakistan coach, admitted that he was “really disappointed” by his side’s performance in defeat at Old Trafford and questioned whether some of them felt they had achieved their objectives with victory at Lord’s. Now he has urged them to replicate the “warrior” performance they demonstrated in that game at Lord’s and insisted England have a vulnerability that can be exploited.

“At Lord’s we were upbeat and played with real spirit. We had that edge. I told the guys I thought we were warriors at Lord’s. But we were completely the opposite at Old Trafford.

“I wasn’t sure if it was as if we had reached our goal and our goal was to come and win a Test and then take your foot off the pedal.”