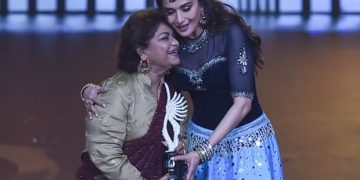 Choreographer Saroj Khan passes away at 71

Choreographer Saroj Khan passes away at 71 July 3 (The Indian Express) – Bollywood choreographer Saroj Khan passed away in Mumbai on Friday following a cardiac arrest. She was 71.

Saroj Khan was born as Nirmala Nagpal. She joined the Indian film industry as a child artiste, playing the younger Shyama in Nazarana. She eventually became a background dancer in 1950s films like Bimal Roy’s Madhumati under the guidance of dance director B. Sohanlal.

Khan later became an assistant choreographer and her first break as an independent choreographer came with Geeta Mera Naam (1974). She tasted fame with the song “Hawa Hawai” from Mr. India (1987). Her collaboration with Sridevi on other projects like Chandni and Nagina further boosted her profile.

It was, however, her collaboration with Madhuri Dixit that transformed the careers of both the artistes, beginning with “Ek Do Teen” (Tezaab), and following it up with dance numbers “Tamma Tamma Loge” (Thanedaar), “Hum Ko Aaj Kal Hai Intezaar” (Sailaab) and “Dhak Dhak Karne Laga” (Beta).

Saroj Khan (1948-2020): A pictorial tribute to the legendary choreographer

In a career spanning four decades, Khan choreographed nearly 2000 songs. The legendary artiste was a recipient of three National Awards for films Devdas, Jab We Met and Sringaram (Tamil). She won Filmfare Awards for movies like Hum Dil De Chuke Sanam, Guru, Khalnayak and Chaalbaaz. Her last film was Kalank (2019), where she choreographed “Tabaah Ho Gaye”, picturised on Madhuri.