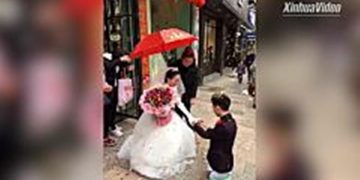 Beijing, August 17 (Xinhua Video): Here is an inspiring video story of a Chinese girl and her legless husband which is going viral on China’s social media. “Wherever we go, I want to be his legs.” the girl told Xinhua.

Six years ago, on October 16, 2013 Du, then only 21, was involved in a nasty car accident which cost him both his legs. His parents were devastated. He was hospitalized for two full years. Being immobilized, he stayed at home most of the time, his life in a shambles.

But Du was not one to give up easily. He developed his own unique way of moving about. He would use two low plastic stools and slide on the ground by moving the stools one after the other. He even learnt to use the stools to climb steps. However, brave as he was, life was indeed very hard for Du.

Soon there was light at the end of the tunnel. Shi Xiaorong,  then just 16 years old, was  to enter his life unobtrusively. She came as an “ordinary” friend, gradually became a lover, and then stayed on to be a loving wife and the mother of his twins. Today Du refers to Shi as Ronrong (Gift of God).

A friend who came to see him, had introduced Du  to Shi. They became friends. Shi had rented a flat on the ninth floor of the building in which Du was staying. So they would meet often. Sometimes he used to visit her in her place of work, a hospital where she was an intern.

Du would call Shi whenever he needed help. But one day, she called him to say that she was hungry. And lo and behold! to her amazement, he had crawled up nine floors to hand over some snacks!

They would often hang out together. Shi would carry Du on her back with him clutching his two stools – his legs so to speak. People used to say that they looked like a couple. But it was a joke, Du said.

One day, Du was talking to Shi about his life and his future,  the hardships he had undergone, and expected to undergo for the rest of his life. He had, in fact, given up on his life. But She  sprung a surprise on him by offering to marry him and look after him forever. When he told her frankly about the harsh realities that lay ahead if she married him, she dismissed them emphatically, saying she did not care.

Shi said that Du and she were just ordinary friends to begin with. But gradually she came to known him, love him, and admire his character and courage.

But the path to marriage was not easy. There was parental opposition on Shi’s side. They were living in another town. They rushed to her place and wanted to take her back. She was in fact “grounded” for three days. But eventually, they consented to the marriage. Now they are like his own parents, Du said.

The wedding took place on January 12, 2017. Now, Du and Shi are parents of twins. She had amazed him by offering to marry him, establishing  a family for him an enabling him to enjoy the many things that make him happy.

“I feel blessed,” he says with happiness writ large on his face. No wonder he refers to Shi as Ronrong, a “Gift of God”.

And Shi reciprocates, saying: “ Wherever we go I want to be his legs.”