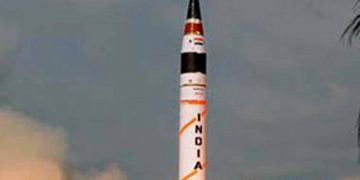 After initial tests, the missile would be finalized and produced on a large scale, and will become a fighting force in the coming years, he added.

Though an Indian report said that the Agni-V can “reach the northernmost parts of China with its strike range of over 5,000-kilometers,” Chinese experts have expressed their skepticism regarding the numbers.

“Though the missile could theoretically hit Beijing, India’s missile technique is far below the world-standard,” Hu Zhiyong, a research fellow at the Institute of International Relations of the Shanghai Academy of Social Sciences said.

Nevertheless, China should be on the alert and further upgrade its anti-missile techniques, Hu added.

Aside from the missile, India is developing various kinds of weapons to compete with China, and its development of nuclear weapons shows that India is engaging in a nuclear arms race with China, Song said.

“It is also a big challenge to the Nuclear Non-Proliferation Treaty (NPT) as India owns a big nuclear arsenal,” he said.

The missile test is being dubbed as another step toward the missile’s eventual inclusion into the Strategic Forces Command (SFC).

A few more tests still remain to be conducted before the 50-ton missile is produced in adequate numbers.

The tri-service SFC was established in 2003 to manage India’s nuclear arsenal.

Aside from the shorter-range missiles ‘Prithvi’ and ‘Dhanush’, the SFC has already included the ‘Agni-I’, ‘Agni-II’ and ‘Agni-III’ missiles in its arsenal.

“India is trying to build a military system with Australia, Japan and the US in order to keep a closer watch on China, which poses a direct threat to China,” Song said.

China should keep increasing its economic as well as defense capability, Song added.

Chinese analysts say that since the Indian Ocean is a “must enter” region for the Belt and Road initiative, as well as the national strategy of building China into a maritime power, China should also enhance its military and economic presence in the Indian Ocean.