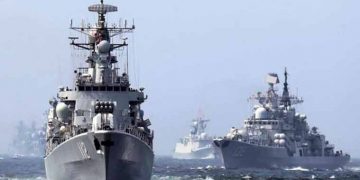 China’s worrisome embrace of the region

China’s worrisome embrace of the region Colombo, January 3: One of the fallouts of the rise of China as an economic and military power in recent times has been the militarization of the Indian Ocean and the Bay of Bengal. South Asia is now about strategic competition, strategic alliances and a strategic dilemma ,says Sri Lankan maritime security expert Adm.Dr.Jayanath Colombage.

“ The next theater of an international armed conflict or cold war, will be the Indian and Pacific Oceans and not the Atlantic and the Pacific as was the case until the end of World War II,” says Adm. Colombage, a former chief of the Sri Lankan navy and now an academic specializing in maritime security.

Since these moves have been made in tandem with Chinese President Xi Jinping’s ambitious Belt and Road Initiative to build ports and roads across Asia, China is seen by India and the US as an economic and military juggernaut on a roll.

“The Indian Ocean is geo-strategically, geo-politically and geo-economically important in the current global security landscape, with a contest for power and influence among major powers in the region and beyond. But in this situation, apart from Strategic Competition, there is Strategic Convergences also. Major powers have begun to strike alliances. But this has resulted in a Strategic Dilemma for smaller, less powerful countries as they are often forced to choose between major powers,” Colombage notes.

China maintains that it does not have any strategic and military objectives in investing in these projects and that they are purely of an economic or commercial nature. But this is taken with a pinch of salt by India and the West. China’s economic entry into Sri Lanka has thrown open its doors to military entry also, at least theoretically they fear. This apprehension has led to the militarization of the Indian Ocean region.

According to South China Morning Post China has established an underwater surveillance network which will help its navy track target vessels more accurately and give it a cutting edge in the Indian Ocean and the South China Sea.

The system collects information about the underwater environment, particularly water temperature and salinity, which the navy can then use to more accurately track target vessels as well as improve navigation and positioning, the Post says.

“A network of platforms — buoys, surface vessels, satellites and underwater gliders — that gather data from the South China Sea, and the Western Pacific and Indian Oceans. That information is then streamed to three intelligence centers — in the Paracel Islands in the South China Sea, the southern province of Guangdong, and a joint facility in South Asia — where it is processed and analyzed,” the paper said.

Experts believe the technology will “tip the scales in China’s favor” in the disputed South China Sea and the Indian Ocean.

According to Yu Yongqiang, a member of the expert panel overseeing China’s global underwater surveillance network  the system can help tip the balance of power in these regions in China’s favor.

In 2014, a Chinese submarine, allegedly a nuclear one,  is said to have docked in Colombo raising the hackles in New Delhi. Apparently, regional power, India, had not been given prior intimation of the visit. Moreover, the visit of the vessel had arrived in tandem with the visit of the Chinese President Xi Jinping to Colombo.

To counter China, the US, India and Australia have formed a strategic alliance called the Quadrilateral or Quad for short. India has embarked on the ambitious multi-million-dollar “Sagar Mala” development project to develop its ports along the eastern and western coasts consistent with the name of the project which is Security and Growth for All in the Region (SAGAR). The US is rebalancing its strategy in the Indo-Asia–Pacific and envisions that soon it will be called the Indo-Pacific Region.

Meanwhile, India is building two Advanced Off-shore Patrol Vessels (AOPV) to strengthen the Sri Lanka Navy and gifted an additional OPV. Japan has indicated that it will give two 30-meter patrol craft to Sri Lanka coast guard and would build three 85-meter OPVs in collaboration with Colombo Dockyard Private limited in Colombo.

The US also announced that it will gift another Coast Guard cutter to boost Sri Lankan navy’s capabilities. India has involved Sri Lanka in naval and military exercises. Only recently, India held exercises with the Maldivian military.

The “Malabar” series of exercises involving the US ,India, Japan and Australia is a major step towards integration of the non-Chinese forces in the region. In addition, India holds bilateral naval exercises like the SLINEX and JIMEX with Sri Lanka and Japan respectively.