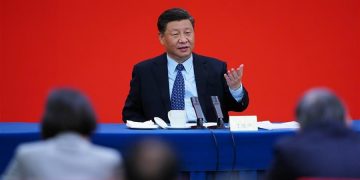 Colombo, June 5 (newsin.asia): Global events following the outbreak of the COVID-19 pandemic have resulted in the adoption of a two-pronged strategy by China – one at the international level and the other at the domestic level.

At the international level, the Xi Jinping regime is taking on its foreign detractors in an aggressive way through “wolf diplomacy” while needling them on the ground by suggestive and intimidating military manoeuvers.

At the domestic level, the regime is consolidating itself politically by taking full control of weak links in the chain like autonomous Hong Kong. On the economic front, it is moving away from risky export-oriented growth in a disturbed COVID-created environment with the US adding to the woes with a threat of sanctions. The Xi regime will now cater to an expanded domestic market and stick to its plan to do away with “absolute poverty” by 2020 end.

In response to US President Donald Trump’s accusation that China had deliberately created and spread COVID 19 to destroy the US and the Free World, and his threat to impose sanctions, China’s military has made moves on seas and lands belonging to or claimed by America’s strategic allies like Taiwan, Japan and India.

Its Air Force crossed the maritime border in the Taiwan Strait in February and March. It recently sent bombers into the Bashi Channel, which separates Taiwan and the Philippines, and the Miyako Strait, between Taiwan and the Japanese island of Okinawa. In April, the Chinese navy deployed its first aircraft carrier, the Liaoning, through the Miyako Strait and Bashi Channel for exercises. Its troops made significant intrusions across the Sino-Indian Line of Actual Control in the Sikkim and Ladakh sectors.

At the diplomatic level, China is now fielding a different breed of diplomats. They are no longer silent and inscrutable mandarins of the Deng Xiaoping era but aggressive and outspoken “wolves”.

The recently held “Two Sessions” of China’s ruling structures brought out the Xi regime’s domestic concerns and its plans to address them.

One of the main concerns was security. The regime saw the continued  agitation in Hong Kong not as a yearning of its people for the freedoms they had been assured of by the Sino-British agreement which transferred the territory to China, but as a US-instigated plot to hive Hong Kong away from China and spawn disaffection in other parts of China.

To counter the threat it was felt that China’s security and intelligence agencies had to be legally allowed to act in autonomous Hong Kong. A government resolution to enable this was approved at the Two Sessions. Although the explanatory note put out by Xinhua assures that Hong Kong’s autonomy will be retained in all other spheres, the West considers it as a fig leaf to cover a total takeover bid. US President Trump has threatened to bar flights from China, and UK Prime Minister Boris Johson has offered to accommodate three million Hong Kong dissenters.

Attended by about 3,000 national lawmakers and 2,000 political advisors, the week-long Two Sessions in Beijing which concluded on May 28, reassured the Chinese masses that the basic goal of the Xi regime will be “Xiaokang” or making China a “moderately prosperous society” and ending absolute poverty by 2020 end. In 2019, about 5.5 million people were still in absolute poverty.

Following X’s call for a people-oriented approach, which calls for putting the lives and livelihood of the people in the forefront and not GDP growth per se, the Two Sessions decided not to fix a GDP growth target for 2020. The plan now is to create local demand to make up for shortfalls in international demand and meet the demand. The Chinese economy had contracted 6.8% year on year during the first quarter of 2020. Consumption, investment and exports have declined. Pressure on employment has risen significantly. According to the WTO, the pandemic had disrupted industrial and supply chains and caused a contraction in international trade which is expected to fall between 13% and 32% in 2020.

But by changing its policies, China is hoping to increase local investments and create nine million new urban jobs. The Two Sessions approved cutting taxes and fees, reducing production and operating costs and increasing financial support to keep business operations stable. The Central government is to cut its expenditure by 50%.

The IMF, in a report in April, said that China’s economy is expected to grow by 9.2% in 2021, even as it projected the world’s economy to contract by 3% this year.

However, domestic orientation does not mean that China will abandon the international market because it’s Belt and Road Initiative (BRI) rests on international markets. Despite COVID-19, Chinese investment in BRI countries have increased by 11.7% year on year in the first quarter of 2020. Xi Jinping is resolutely against protectionism favoured by his rival Donald Trump. The China International Import Expo, the world’s first national-level exhibition dedicated to imports, will be held for the third year in Shanghai. More than 1,400 companies have signed up for it.

Meanwhile, the US has been warned by American economic experts that harsh measures against China will boomerang on the US economy. Allan Sloan, business columnist of the Washington Post wrote: “In the last three months, according to US Treasury statistics, the U.S. national debt has risen by astounding 2 trillion US dollars to about 25.4 trillion dollars and will rocket upward in future months. So where’s the money going to come from? Historically, China has been a huge buyer of US Treasury securities and owned 1.08 trillion dollars of them as of March 31, the most recent date for which US Treasury numbers are available. China’s holdings rank second, behind Japan’s 1.27 trillion dollars,” Sloan wrote.

“Opting out of China would prove particularly disruptive for America’s industrial and technology heavyweights that rely on the Chinese manufacturing base as critical parts of their supply chains. China still makes roughly 25% of all manufactured goods around the world, in part because of the difficulty in finding a sufficient workforce on other countries’ factory floors,” CNBC said.