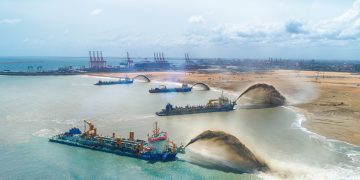 With the reclamation of land completed, the Chinese-funded Port City under construction near the Colombo Harbor is beginning to take shape.

It will soon be ready to host maritime structures and other infrastructural construction.

A mechanical, electrical and plumbing manager of the project, Sanjeewa said it was not easy to push forward the development in the beginning.

Sanjeewa still vividly remembers that at a Belt and Road forum in Beijing in May 2017, he had asked the Sri Lankan government for a backup water supply inlet for the project site.

The Colombo Port City has gradually but increasingly gained popularity in the island country, with many looking forward to making use of the facilities.

“We need to understand each other first, and bond our hearts together. Luckily, Sri Lanka and China have achieved that in the Port City project,” Sanjeewa said.

On reclaimed land adjacent to the commercial district of Colombo, the Port City is being co-developed by the Sri Lankan government and China’s CHEC Port City Colombo (Pvt) Ltd, a subsidiary of China Communications Construction Company Limited (CCCC).

The project aims to be a commercial, financial, residential and international entertainment hub in South Asia.

At a ceremony held earlier this month marking the completion of land reclamation, officials said that 269 hectares of land were reclaimed from the sea.

The project is a technological marvel and one of the most spectacular development projects Sri Lanka has ever had, said Minister of Megapolis and Western Development Patali Champika Ranawaka.

Construction of the Port City started in September 2014 and is expected to take 25 years to complete.

The project is part of the China-proposed Belt and Road Initiative (BRI), put forward in 2013 with the aim of building a trade and infrastructure network connecting Asia with Europe and Africa.

The project “symbolizes friendship between China and Sri Lanka that has a long history and which is worth more than the value of the investment,” Chinese Ambassador Cheng Xueyuan said at the ceremony.

It has already created more than 4,000 local jobs. In the next 20 years, a total of 83,000 jobs are expected to be created, according to the Chinese ambassador.

Local employees said the project has provided not only jobs but higher salaries and a better life.

The total Gross Floor Area will be up to 5.73 million square meters, comprising residences, hotels, offices, retail space, and iconic developments such as a theme park, a yacht marina, a central park, a medical center, an international school and a sand beach, according to CCCC Chairman Liu Qitao.

“These will attract a further 13 billion dollars in investment in property development within the city,” Liu said.

He believes the Port City will help Sri Lanka attract not only foreign investment, but also international talent and advanced technology.

“We have been to Southeast Asia, the Middle East and many regions in the world to attract investment for the Port City and about a dozen international enterprises have expressed interests in the project,” said Liang Thow Ming, chief sales and marketing officer at CHEC Port City Colombo (Pvt) Ltd.

A dredging area, or an excavation area, is usually located 7.5 km from coastline to minimize its impact on the local ecosystem, the marine creatures in particular, he explained.

In the pumping area, sediment barriers were put up to protect the environment before a breakwater was built.

Nearby residents were initially concerned about the possible impact of the mega-project on their communities, said Noorul Aleem, senior engineer of the Port City project’s Health, Safety and Environment (HSE).

However, the local authorities worked meticulously to ensure that all environmental requirements, such as air quality, noise, vibration and water quality, were properly met by the contractors.

“Now local residents are convinced that the Port City will fully benefit the country’s economy without harming the environment,” the engineer said.

According to Minister Ranawaka, 26 government agencies and environmental monitoring teams were appointed to oversee the Port City project and its environmental impact.

Rawa, a vendor who sells kites at Colombo’s Galle Face Green park close to the Port City, has witnessed the Chinese dredgers pumping sand into the air almost every day since the reclamation started in October 2016.

He said he will “miss” the scene, after learning that the dredgers will soon leave.

“Anyway, the Port City will benefit my children in the future,” he added.