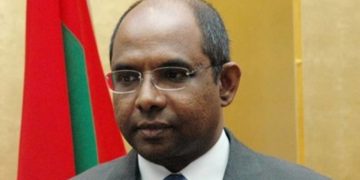 Male, July 21 (Xinhua): The relationship between the Maldives and China is “an example of how one of the smallest members of the international community can have a mutually productive and progressive relationship with one of its biggest and most powerful members,” and the current Maldivian government is looking forward to promoting its relation with China to a new height, Maldivian Foreign Minister Abdulla Shahid told Xinhua in an interview here on Sunday.

Shahid said the Maldives-China relationship is anchored on a strong foundation of shared historic bonds, sovereign equality and mutual respect for territorial integrity. And the historical ties have been cemented by recent increased people-to-people exchanges at all levels.

“The heightened cooperation between our two countries has indeed been mutually beneficial to our peoples. China will remain as an important economic and bilateral development partner for the Maldives, in its journey to become one of the most vibrant middle-income developing countries,” the minister told Xinhua.

“I am personally committed to ensuring that our already strong relations are further enhanced with more vigor and passion in the years to come,” he said.

Speaking on the upcoming 70th founding anniversary of the People’s Republic of China, Shahid expressed his congratulations to the Chinese government and the Chinese people, saying that Chinese government has always followed a people-centered development philosophy and achieved remarkable milestones over the seven decades.

“The Maldives supports China’s territorial integrity and we remain firmly committed to the One-China Policy,” he added.

In the interview, Shahid also reiterated that the Maldives is a close partner and supporter of the Belt and Road Initiative proposed by China.

The Maldivian people have benefited immensely from the assistance provided and are deeply appreciative of the key developmental projects such as the China-Maldives Friendship Bridge, the second runway of Velana International Airport and the several housing projects, said the foreign minister.

“The recent high-level participation by our economic minister at the Thematic Forum on Unimpeded Trade of the Second Belt and Road Forum for International Cooperation signifies the importance the government accords to the Belt and Road Initiative,” he said.

Shahid stressed that the Maldives will continue to work with the government of China in future to attract and encourage Chinese investments to the Maldives and engage in mutually beneficial development partnerships that conforms to the common principles of both countries.

Speaking of the tourism cooperation between the two countries, Shahid said that tourism is the largest industry in the Maldives and China is the biggest market for tourism in the Maldives for the past decade.

According to the figures given by the minister, in the first quarter of this year, 95,272 Chinese tourists visited the Maldives, accounting for 14.7 percent of the overall foreign tourists.

The government of Maldives assures its continued efforts with stakeholders to ensure the safety and lawful interests and rights of Chinese tourists, said the minister.