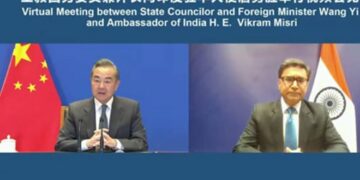 Beijing, December 7: China has urged the revival of the “Wuhan” and “Chennai” spirit in Sino-Indian relations. The outgoing Indian Ambassador in China, Vikram Misri, told Chinese Foreign Minister Wang Yi in a video interaction that he will continue to promote Sino-Indian ties. And Wang praised him for it, says a report in Global Times.

Here is the report in full:

During his virtual meeting with the outgoing Ambassador of India H.E. Vikram Misri on Monday, Chinese State Councilor and Foreign Minister, Wang Yi, put forward the “three dos and three don’ts” for China-India relations to encourage the two sides to increase mutual understanding instead of falling in misjudgments. He also said that both sides can and should continue to stand together on key issues related to the shared interests of developing countries.

Wang praised Ambassador H.E. Vikram Misri’s work during his stay in China and said that China and India are two countries with ancient civilizations and two emerging economies and neighbors that cannot be moved away. To build trust, even the Himalaya Mountains cannot stop our friendship but once trust is lost, the two sides cannot stand together, even with a wide expanse of flat land ahead, Wang remarked.

China and India should be partners and friends and the consensus reached by the leaders of the two countries to provide each other with development opportunities, instead of posing threats, should also be reiterated. Both sides should implement the “Wuhan Spirit” and the “Chennai Vision” as guidance, Wang noted.

READ: Key issues in the Maldives as it goes on election mode

Wang also put forward the “three dos and three don’ts” for China-India relations, including having mutual understanding and avoiding misjudgment, taking a long-term perspective and remaining undisturbed by temporal things, and providing each other with opportunities instead of blocking each other.

Ambassador H.E. Vikram Misri said that he was honored to take the role of ambassador to China for three years. Although India-China relations have experienced some twists and turns, they are still full of opportunities. The two sides have maintained in close communication and all the mechanisms keep working.

Ambassador Misri noted that when talking with Wang, the Indian Minister of External Affairs  Subrahmanyam Jaishankar stressed that India did not change its strategic judgment on bilateral relations with China and is willing to work with China to understand each other’s core concerns and to achieve mutual benefits.

Although there are some dark clouds in the sky we already see their silver rim, said the Indian Ambassador, noting that “I would like to make continuous efforts on defending and developing China-India relations.”

Wang praised Ambassador Misri’s remarks and said the dark clouds would eventually disperse and sunshine will come back to the land. “We are confident to this and hope that Mr Misri will carry on playing the role of supporter, defender and promoter of China-India cooperation,” Wang said.