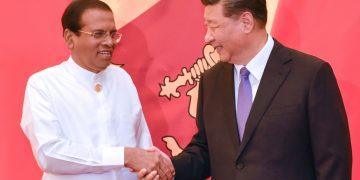 China to assist Sri Lanka to wipe out terrorism

China to assist Sri Lanka to wipe out terrorism 15 May (newsin.asia) – Chinese President Xi Jinping has vowed to provide all possible assistance to Sri Lanka in its endeavour to strengthen national security by wiping out the scourge of terrorism, the president’s media division said in a statement.

The Chinese President made this promise during a meeting with Sri Lankan President Maithripala Sirisena at Presidential Palace.

He said that China is always ready to go hand in hand with Sri Lanka which is recovering after effectively facing the challenge of terrorism adding that the Chinese government will provide any assistance to Sri Lanka at any time.

President Xi Jinping, while condemning the Easter Sunday attacks expressed his condolence to the families who were affected by the attacks. He said that he is against any form of terrorism in any part of the world.

He also said the Chinese government has taken steps to provide a grant of Rs 2,600 million for Security Forces during this emergency situation on a request of President Maithripala Sirisena

The Chinese President has also agreed to immediately release 100 jeeps and many other types of equipment costing Rs. 1,500 million to the Sri Lanka Police Department.

The two governments also signed an agreement promoting closer cooperation in the field of defence following the bilateral discussion between the two leaders.

President Sirisena briefed his Chinese counterpart about the Easter Sunday attacks, steps taken by the government following the attacks and the new security mechanism put in place by the government.

The discussion also focused on strengthening cooperation in the defence sector and sharing intelligence between the two countries.

President Sirisena said that the country does not have technological expertise and equipment to trace the individuals who are fanning the flames of terrorism by propagating false information through social media.

The Chinese President agreed to provide the necessary technological expertise and equipment to the country immediately. He also informed President Sirisena that a Chinese technical team will be sent to Sri Lanka soon to look into the matter. Both leaders also discussed the progress of development projects being implemented in the country with Chinese financial assistance. Sri Lanka President said that he expects to complete the constructions of these projects soon.

They also discussed the progress of Kidney hospital being constructed in Polonnaruwa with Chinese assistance. The Chinese President praised the cooperation given by Sri Lanka as a true ally.

The Chinese President appreciated the drug eradication program of President Maithripala Sirisena and said that he was confident that Sri Lanka will be able to win that challenge.