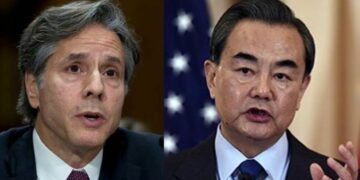 Beijing, August. 17 (Xinhua): In a phone conversation with the US Secretary of State Antony Blinken on Monday, the Chinese Foreign Minister Wang Yi expounded China’s stance on the situation in Afghanistan, saying that facts have once again proved that mechanically copying an imported foreign model cannot be readily used in a country with a completely different history, culture and national conditions.

“Without the support of the people, a government cannot stand, and the use of power and military means to solve problems will only cause more problems,” Wang said, adding that lessons in this respect deserve serious reflection.

Wang said that China stands ready to communicate with the United States to push for a soft landing of the Afghan issue, so that a new civil war or humanitarian disaster can be prevented in Afghanistan and the country will not relapse into a hotbed and shelter for terrorism.

“China encourages Afghanistan to establish an open and inclusive political framework in accordance with its own national situations,” Wang added.

The hasty withdrawal of U.S. troops has had a severe negative impact on the situation in Afghanistan, and it will not be a responsible attitude if the United States created new problems in its next move, Wang said.

The previous U.S. administration announced the revocation of the designation of the East Turkistan Islamic Movement as a terrorist organization, and applied double standards to the counter-terrorism issue, which is dangerous and wrong, Wang said, calling on the U.S. side to start afresh to remove obstacles to the China-U.S. cooperation on Afghanistan and the international counter-terrorism cooperation.

Wang said that both China and the United States are permanent members of the United Nations Security Council and important participants in the contemporary international system.

In the face of various global challenges and urgent regional hotspot issues, the two countries should carry out coordination and cooperation, which is what the international community is looking forward to, Wang added.

And yet the U.S. side cannot, on the one hand, deliberately contain and suppress China and undermine China’s legitimate rights and interests, and on the other hand, expects support and cooperation from China, because such logic never exists in international exchanges, Wang said.

It is an objective fact that China and the United States differ in ideology, social system, history and culture, and neither side can change the other, Wang said.

It is advisable for the two major countries to work together on the basis of mutual respect to find a way to coexist peacefully on this planet, he said, adding that history will surely prove that whatever the U.S. side intends to do, China-U.S. relations should eventually seek only such a future and follow only such a path, Wang said.

The U.S. side should pursue a rational and pragmatic policy toward China, respect China’s core interests and major concerns, strengthen dialogue and manage differences in accordance with the spirit of the phone talks between the two countries’ heads of state, and push China-U.S. relations back on the right track at an early date, Wang added.

During the phone talk, Blinken expressed appreciation for China’s participation in the Doha meeting on the Afghan issue, noting that the current situation in Afghanistan is entering a crucial stage.

The Taliban should announce a clean break with extremism, opt for an orderly transfer of power and establish an inclusive government, the top US diplomat said, expressing hope that China will also play an important role to this end.

The United States recognizes that the future of Afghanistan should be decided by the Afghan people, Blinken said, calling on the Taliban to ensure the safety of all those who wish to leave the country

Blinken further said that it is very important for the United States and China to maintain communication on major international and regional issues.

Blinken agreed that it is a common goal for the United States and China to realize peaceful coexistence, voicing hope that both sides will seek and carry out cooperation.

Of course there are also obvious differences between the two sides, Blinken said, adding that those can be gradually resolved in a constructive way in the days to come.

The United States, Blinken said, reiterates its opposition to all forms of terrorism and its pledge not to seek to foment unrest in China’s western border areas.

The evolving situation in Afghanistan once again demonstrates the importance of U.S.-China cooperation on regional security in a constructive and pragmatic manner, he said.