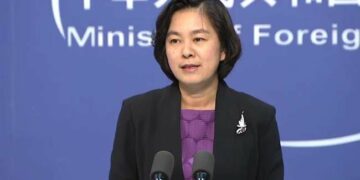 China seeks an “open and inclusive Islamic government” in Afghanistan

China seeks an “open and inclusive Islamic government” in Afghanistan Beijing, August 17 (Anadolu Agency): China on Monday threw its weight behind an “Islamic government” in Afghanistan, urging the Taliban to honor its commitments for a negotiated settlement in the country.

“China hopes that the Taliban will implement its previous vows to establish through negotiation an open and inclusive Islamic government and act responsibly to ensure the safety of Afghan citizens and foreign missions in Afghanistan,” said Foreign Ministry spokeswoman Hua Chunying.

Beijing’s endorsement of a government led by the Taliban in Afghanistan comes a day after US-backed President Ashraf Ghani fled the country.

The Taliban have taken over the country after capturing the capital Kabul on Sunday and are in the process of establishing their government, which they call the Islamic Emirates of Afghanistan, that had been removed after US-led foreign forces occupied the war-torn country in 2001.

The group has declared an end to their war against foreign occupation but says that the “real test would begin now.”

Abdul Ghani Baradar, the Taliban’s top envoy who led negotiations with the US and other parties to end the occupation in recent years, said in a brief video statement: “The victory … was unexpectedly swift and had no match in the world.”

“The real test would begin now with meeting the expectations of the people and serving them by resolving their problems,” Baradar said.

“China respects Afghan people’s right to decide their own destiny and future, and is willing to continue to develop friendly cooperation with Afghanistan. China will play a constructive role for peace and reconstruction in Afghanistan,” said Hua, addressing a news conference in Beijing, according to the Chinese Global Times daily.

She said that unlike western countries the Chinese embassy in Afghanistan is “working as usual. Most Chinese nationals had been arranged to return to China previously and some chose to stay. The embassy is in touch with those who stay and they are safe.”

Russia and Pakistan have also kept their embassies open in the country. The US, UK, and Germany have evacuated their staff from their Kabul missions.