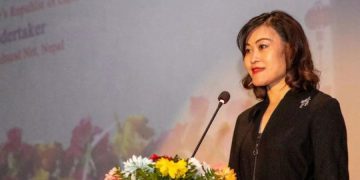 Kathmandu, January 4 (The Kathmandu Post): The debate within the Nepal Communist Party over the ratification of the United States’ Millenium Challenge Corporation’s Nepal Compact through Parliament continues, China has said it welcomes any foreign economic support to Nepal.

Chinese Ambassador to Nepal Hou Yanqi said on Friday that Nepal is a least developed nation and therefore needs international support—not just from China but all over the world for its prosperity.

“We welcome any international assistance to Nepal if it is for economic cooperation,” said Hou. “We would like to see the ratification process of the MCC and the Nepal government take a positive decision for its interest.”

A significant bone of contention in the ongoing debate over the United States’ Millenium Challenge Corporation (MCC) has been that the MCC is a part of the US’ Indo-Pacific Strategy (IPS), which is widely seen to be aimed at countering China in the region. A section of ruling party leaders has been arguing that Nepal should reject the MCC—and the IPS—since it is countering a friendly neighbour.

The Chinese Ambassador’s clarification now throws a spanner into those arguments. However, party leaders remain steadfast in their opposition.

“When the government has taken a position, a diplomat cannot publicly counter it,” standing committee member Dev Gurung told the Post. “It’s a matter of decorum which the Chinese strictly follow. So diplomats won’t object openly. Her [Hou’s] statement appears conditional— ‘if Nepal agrees’.”

Gurung, who is also the chief whip of the parliamentary party, has been one of the most vocal opponents of the MCC.

Friday’s meet was only the second press conference Hou has held since taking charge at the Chinese embassy in November 2018. The ambassador said that she had been closely following the ongoing debate over the MCC and wished to clarify China’s position.

The MCC’s Nepal compact was registered in the House of Represenatives on July 15 last year but has not yet been tabled for ratification due to differences within the ruling party. In an interview with Kantipur daily, the Post’s sister publication, Prime Minister KP Sharma Oli had blamed former Speaker Krishna Bahadur Mahara for delaying the ratification process. Oli, however, has committed to ratifying the agreement via the Parliament’s winter session.

However, a number of ruling party leaders have opposed the MCC. The recent Secretariat and Standing Committee meetings of the ruling Nepali Communist Party failed to decide on ratification following a heated debate over whether the MCC was a part of the IPS. Senior leaders Madhav Kumar Nepal, Bhim Rawal, Dev Gurung and Minister for Tourism Yogesh Bhattarai have asked the government to modify the compact and not approve it through the federal parliament if the MCC is a part of the US-led Indo-Pacific Strategy.

US officials, on numerous occasions, have said that the MCC is most definitely a part of the IPS, which is a broad umbrella for everything that the US is doing in the region.

The Nepali Congress, meanwhile, has stood firmly in favour of the agreement and has asked the ruling party to not create any hindrances for its ratification. The opposition party has even so far as to say that it would be “suicidal” for Nepal to reject the agreement.

Nepali Congress spokesperson Bishwo Prakash Sharma said that Nepal should accept support from any country for its prosperity, although it has to be cautious.

“However, it would be unfortunate to reject the MCC on the grounds that it is linked to the IPS,” Sharma told the Post. “The government needs to abide by its commitments and the document, regardless of what others, even China, are saying.”

(The featured image at the top shows Ms.Hou Yanqi, China’s Ambassador to Nepal)