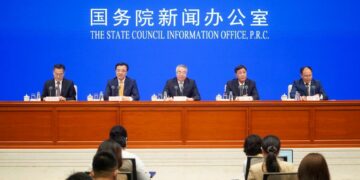 Colombo, June 27 (newsin.asia): Ahead of the centenary celebrations of the Communist Party of China (CPC), China’s State Council has issued a White Paper on the country’s party system. The document entitled: China’s Political Party System: Cooperation and Consultation, released in Beijing on June 25, says that China has a multi-party system, in which, other than the CPC, eight political parties and Independents (called non-affiliates) exist and function effectively.

The White Paper says that the non-CPC parties and non-affiliates are routinely consulted and that many of their members are co-opted in governance. However, these parties and individuals are constitutionally required to function under the CPC’s leadership. They are neither an “opposition” nor are they idle “bystanders” the document adds.

The non-CPC parties and non-affiliates have a role to play because they reflect sectional interests, and different communities like the minorities. They are institutional mechanisms to consult them before making decisions and are also assigned roles in government.

Justifying the unique system, the White Paper says: “The CPC and the other political parties have created a multiparty cooperation system in which the CPC exercises state power and the other parties participate fully in the administration of state affairs under the leadership of the CPC. This is a unique political model. It has displayed unquestionable strength and vitality in China’s political and social life. It is essential for the task of modernizing China’s governance system and capacity. It continues to make an invaluable contribution to the political progress of humanity.”

Growth of the System

While acknowledging that the Revolution of 1911 led by Dr. Sun Yat-sen ended the feudal autocracy that had ruled China for more than 2,000 years, the White Paper says that Dr.Sun Yat-sen had failed to do away with the backward social system and failed to lift people out of misery. But the CPC, founded in 1921, has “succeeded in applying Marxist tenets to the Chinese context, rallying all the forces that can be combined to form an extensive united front.”

“By introducing the policy of reform and opening up, the CPC has pioneered socialism with Chinese characteristics so that the people can enjoy a better life, and the nation can become stronger and have its status notably raised in the international community,” the White Paper says. By the end of 2019, CPC’s membership had reached 91.9 million.

Characteristics of the Political Parties

Describing the characteristics of the non-CPC parties, the White Paper says that the Revolutionary Committee of the Chinese Kuomintang (RCCK) was created by former members of the democratic group of the Kuomintang (Nationalist Party of China, or KMT). It has a membership of more than 151,000. The China Democratic League (CDL) was founded by a group of well-known public figures and intellectuals seeking democracy and progress. It was with the CPC fighting against Japanese aggression (1931-1945). The China Democratic League (CDL) is composed of senior intellectuals specializing in culture, education, and relevant fields of science and technology. It has a membership of more than 330,000.

The China National Democratic Construction Association (CNDCA) was initiated by an assembly of businesspeople and associated intellectuals. It was with the CPC in the fight against Japan.  It advocated democratic economic planning and corporate autonomy. The CNDCA is home to businesspeople, economic specialists and academics and has a membership of more than 210,000. The China Association for Promoting Democracy (CAPD) was founded by intellectuals in the fields of culture, education, and publishing. After World War II, it exposed the KMT’s reactionary rule. The CAPD recruits intellectuals in education, culture, publishing, and relevant fields of science and technology. It has a membership of more than 182,000.

The Chinese Peasants and Workers Democratic Party (CPWD) was founded by left-wing KMT members supporting Sun Yat-sen’s principles of allying with the Soviet Union, aligning with the CPC, and helping peasants and workers. It has a membership of more than 184,000. The China Zhi Gong Party (CZGP) was founded by Overseas Chinese. It is mainly composed of the middle and higher ranks of returned overseas Chinese and their relatives, and representatives of people with overseas connections. It has a membership of more than 63,000. The Jiusan Society (JS) was founded by intellectuals in culture, education, science and technology. The JS recruits intellectuals in science and technology, and relevant fields of higher education, medicine, and health care. It has a membership of more than 195,000.

The Taiwan Democratic Self-Government League (TDSGL) was founded by Chinese in Taiwan. It represents the Taiwanese in mainland China and intellectuals in Taiwan studies. It has a membership of more than 3,300.

The system of CPC-non-CPC cooperation took shape during political consultations in preparation for the founding of the Peoples’ Republic of China in 1949, the White Paper says. The consultation and cooperation was to be under the overall leadership of the CPC.

“Currently, more than 12,700 non-CPC individuals are serving as special staffers in relevant departments at and above the prefectural level. They made 36,000 interventions in democratic oversight over poverty alleviation, offered 2,400 items of written advice to CPC committees and governments of the eight provinces or autonomous regions, and submitted more than 80 reports of various types to the CPC Central Committee and the State Council, making a great contribution to securing victory in the campaign against poverty.”