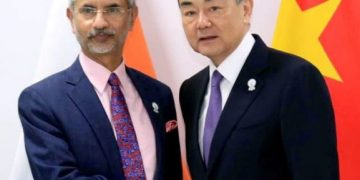 Colombo, June 17 (newsin.asia): The Chinese embassy here issued a press release on Wednesday saying that in the telephonic conversation between Foreign Ministers Wang Yi and S.Jaishankar earlier in the day, the two leaders agreed that India and China will settle the border issue through talks and refrain from violence and provocative action.

The release issued by Luo Chong, Spokesperson / Chief of Political Section said: “The two sides agreed to fairly address the serious situation caused by the conflict in the Galwan Valley; jointly observe the consensus reached at the commander-level meeting between the two sides; cool down the situation on the ground as soon possible; and maintain peace and tranquility in the border area in accordance with the agreements already reached between the two countries.”

“Jaishankar shared India’s position and expressed India’s readiness to act in the interest of the bilateral relations, implement the consensus reached by the two leaders together with China, peacefully resolve disputes in the border area through dialogue, and reduce tensions in the border area.”

Presenting China’s case, Wang Yi Wang Yi stressed that “China and India are both emerging powers with more than one billion people, and both have the historic mission to speed up the realization of our own development and revitalization.”

“Therefore, mutual respect and support is a sure way and meets the long-term interests of both countries; suspicion and friction is a wrong path and goes against the fundamental aspiration of the two peoples. Both sides should act on the important consensus reached by the two state leaders, strengthen communication and coordination to properly address the border situation through existing channels, including the China-India Special Representatives’ Meeting and border personnel meeting mechanism, so as to jointly preserve peace and tranquility in the border area.”

Earlier, Wang Yi charged that on the evening of 15 June, the Indian frontline border forces openly broke the consensus reached at the commander-level meeting between the two sides.

“When the situation in the Galwan Valley had deescalated, the Indian forces crossed the Line of Actual Control again, made deliberate provocations and even violently attacked the Chinese soldiers who went for negotiations. This subsequently led to fierce physical clashes and resulted in casualties. The adventurism of the Indian army seriously violated agreements on border issues between the two countries and severely violated basic norms governing international relations.”

“China once again lodges its strong protest to the Indian side. We urge the Indian side to conduct a thorough investigation, hold the violators accountable, strictly discipline the frontline troops and immediately stop all provocative acts to ensure such incidents will not occur again. The Indian side must not misjudge the current situation and must not underestimate China’s firm determination to safeguard our (it’s) territorial sovereignty.”